The Irishman: Scorsese says no one else in Hollywood would back movie 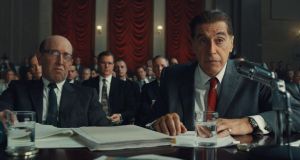 Martin Scorsese has defended Netflix, which stepped in to finance his new film, The Irishman, which stars Robert De Niro, Al Pacino and Joe Pesci, when other backers dropped out.

The director said that although it was vital to defend the “communal experience” of watching films in cinemas, the streaming giant was prepared to give him full backing after more traditional studios decided the movie would be too expensive.

“There’s no doubt that seeing a film with an audience is really important,” he said. “There is a problem, though: we have to make the film. We’ve run out of room, in a sense; there was no room for us to make this picture, for many reasons. [But] having the backing of a company that says that you will have no interference, you can make the picture as you want – the trade-off being it streams, with theatrical distribution prior to that. I figure, that’s a chance we take, on this particular project.”

The Irishman, which tells the story of the real-life Mafia hit man Frank Sheeran (played by De Niro), who is suspected of befriending and killing the celebrated union boss Jimmy Hoffa (Pacino) in 1975, was acquired by Netflix in 2017 after its previous backers Paramount and STX dropped out in 2017. It is thought the studios got cold feet after the cost of pioneering “de-aging” CGI, used to make the central characters appear younger in extensive flashback scenes, caused the budget to balloon to a rumoured $200 million, or about €180 million, as well as the disappointing returns for Scorsese’s previous film, the martyrdom drama Silence, which starred Liam Neeson.

Netflix has incurred the wrath of other sectors of the film industry, which are committed to defending the cinema experience. Several major US chains, including AMC and Regal, as well as Vue, are likely to refuse to screen the film, as part of a long-running boycott of the streaming giant and its failure to respect the cinemas’ traditional 90-day window of exclusivity. Netflix has also been excluded from the Cannes film festival for the past two years (because of France’s even more stringent rules), while Scorsese’s fellow director Steven Spielberg is recently thought to have suggested that their films should not be eligible for Oscars.

Partly to compensate for its limited presence in cinemas, The Irishman will screen for a month at New York’s historic Belasco theatre, on Broadway.

Speaking at the end of the BFI London Film Festival, Scorsese also renewed his criticism of “Marvel-type pictures”, repeating his assertion that they were “not cinema”. They are “theme-park films”, he said, “where theatres become amusement parks”. “That’s a different experience: it’s not cinema, its something else, and whether you [like] them or not we shouldn’t be invaded by it. That’s a big issue, and we need theatre owners to step up, to allow theatres to show films that are narrative films.” The directors James Gunn and Joss Whedon and the actor Samuel L Jackson defended Marvel after Scorsese first broached the subject in a magazine interview earlier this month.

The director also expressed doubts that long-form TV would replace the filmgoing experience. “I thought for a while that long-form TV was going to be cinema, but it’s not. It simply isn’t. It’s a different viewing experience: you can go to episode thee, four, then 10; one one week, another the next – it’s a different kind of thing. What’s got to be protected is the singular experience, ideally with an audience.” – Guardian

The Irishman is released on November 8th, before being available on Netflix on November 27th

Fleet Foxes: ‘I’m trying to find silver linings in this madness, a healing space in music’
7