Why does The Irishman’s leading woman get only six words? 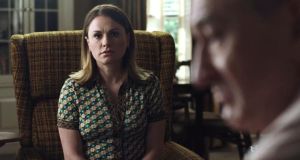 When Anna Paquin joined the cast of Martin Scorsese’s film The Irishman it seemed like a decent break for the actor, who has flown under the radar since her days as the half-vampire Sookie Stackhouse in True Blood.

Paquin’s was the only big female name alongside Robert De Niro, Al Pacino, Joe Pesci and a myriad of other male stars – an anomaly that held the promise of a particularly meaty woman’s role (if Scorsese’s gangster flicks serve as evidence).

But even though The Irishman never suggests it would prominently feature its female characters, few could have anticipated quite how absent its most important woman is.

Played by Paquin as an adult woman and by Lucy Gallina as a child, Peggy Sheeran is the daughter of De Niro’s hit man, Frank Sheeran. A practically mute, moral spectre judging her father’s criminal lifestyle from the sidelines, she appears only a handful of times – less than 10 minutes in total.

The Irishman’s narrative revolves around Frank’s imperfect recollections of when he first became involved with the Italian Mafia, in his 40s, through to his present day in a nursing home.

Within these boundaries Peggy is disconcertingly diminished: Paquin speaks six words in a movie that clocks in at 3½ hours. There may be a potency to such intentional restraint within the film’s elegiac trappings, yet circumscribing Peggy as Frank’s moral conscience remains doggedly frustrating. Is she more of a symbol than an actual person?

Although not exactly gender progressive, Scorsese’s testosterone-fuelled gangster movies have carved out provocative roles for women. Take Lorraine Bracco’s complicit mob wife in GoodFellas. Along with her protagonist husband, Henry, Bracco’s Karen Hill is given the narrative space to air her grievances and articulate her desires in stretches of narration, helping to outline the private and public consequences of Henry’s criminal enterprise.

Ginger in Casino, meanwhile, may fit too neatly into the femme-fatale archetype, but Sharon Stone’s physically committed performance, from poised hustler to woman on the edge, brought down by addiction and avarice, is one of the film’s memorable elements

But Paquin’s Peggy is markedly different from the women’s roles in Scorsese gangster films past; she is more a tool for expressing the protagonist’s moral blindness, and a vehicle that primes audiences to feel certain ways about other characters, rather than a fully drawn person.

As a child Peggy learns to avoid her father after witnessing a brutal episode that demonstrates his capacity for violence. She openly disdains his shady friend and employer, Russell Bufalino (Joe Pesci), whom she understands on some instinctive level is a villain and her father’s corruptor; she rebuffs his attempts to win her favour with Christmas cash and ice skates. Instead Peggy prefers the company of the impassioned and personable labour-union leader Jimmy Hoffa (Al Pacino), and his warm, if flawed, paternal instincts.

As an adult Peggy’s taciturn presence is an implicit condemnation of the film’s degraded masculine world view. The nail in the coffin of Peggy and Frank’s relationship is Paquin’s only spoken line in the film, a six-word question that has Peggy confronting her father after his act of betrayal.

Paquin’s comically low line count is reminiscent of criticism of Once upon a Time in... Hollywood. Why was Margot Robbie, an Academy Award-nominated actor, given so much less dialogue than her male counterparts? The question was not unwarranted. After all, Robbie’s Sharon Tate is the beating heart of Quentin Tarantino’s unexpectedly tender tale of historical revisionism.

The suggestion that Tarantino short-shrifted Robbie spawned a debate that lasted through the summer. Is Tarantino’s Tate an objectified male fantasy? Or is she a triumphantly humanised depiction of a woman whose legacy has been defined by the tragic circumstances of her death? Are the women in Tarantino’s dude-heavy films empowered or problematically rendered?

In any case, women in The Irishman are moral reminders and checks on an inward looking all-male reality. So much of The Irishman’s final act has us yearning for Peggy’s final thoughts, for Paquin to take the stage once and for all in some sort of cathartic fashion. But we get no such closure, condemned like Frank to a dreary purgatory of what could have been. Perhaps Scorsese too readily buys into the symbolic potency of women as moral beacons. Peggy’s role is trimmed to a sliver of silent glances by the blinkered, perhaps repressed memories of her aged father – an easy cop-out for reducing her significance to mere phantom guilt trip with feminine charms.

If Scorsese’s filmography has taught us anything it’s that women are too often caught in the cross hairs of the world of men, whether as victims or as cunning culprits, as Jezebels or as slaves to love. But in opting out of her father’s world Peggy contextualises the heartlessness and cruelty of the like-minded men (and women) who have so long fascinated the film-maker. Instead Peggy gestures at an alternative, which strikes me as more than the disgruntled rejection of “daddy’s little girl”, rather hinting at an entire generational disenchantment. If only she were given the flesh and bones to fully bring to life this subtle revolutionary element. – Guardian