The Irishman review: It’s good, but it’s no GoodFellas

Martin Scorsese’s gangster film will play well on Netflix, but it’s even better in the cinema 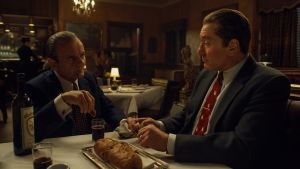 There is a temptation to sweep the word “autumnal” before any sombre late work by a familiar master. We hope and trust Martin Scorsese will live for another 1,000 years, but The Irishman suggests colder airstreams. “Wintery” hardly covers it.

When it was announced that the director was to reunite with Robert De Niro and Joe Pesci (and belatedly invite Al Pacino into the Scorsese family) for a tale of postwar gangsterism, premature comparisons were, not unreasonably, drawn with Casino and GoodFellas. For all their grim themes, those movies bristled with Telecaster energies that allowed us to feel guilty delight in the escalating violence. There’s little of that here.

The picture begins with a sly genuflection to the director’s own legacy. A lengthy shot takes us down a corridor while The Five Satins’ In the Still of the Night doo-wops gently in the background. Scorsese has done this before in swish nightclubs and seedy bars. This time, however, we’re in a care home for the elderly, and, rather than ending with flash young men in pastel shirts, the shot takes us to the decrepit, near-expired Frank Sheeran.

The busy wipes, lively zooms and fast cuts that characterised the earlier gangster flicks are not on display

Dolloped in make-up as an old man, digitally de-aged in flashback, De Niro plays the former hitman as a half-bright pinball battered left and right by America’s secret histories. There are buzzes and bonuses along the way, but the framing device reminds us that commonplace mortality will not be defeated. Stick your head out the window and you might feel Ingmar Bergman’s chilly winds.

Too much? Well, the frame within the frame involves a car journey not unlike that in Wild Strawberries. It is the mid-1970s and Sheeran, accompanied by associate Russell Bufalino (Pesci) and wives, are travelling towards a meeting with legendary union leader Jimmy Hoffa (Pacino).

Along the way, reminders of the even earlier days are kicked up. Frank remembers how, after serving in the second World War, he worked as a truck driver and, evading charges of pilfering, was edged towards deadly work for the Pennsylvanian Bufalino family. He became friends with Hoffa. He rubbed up against many of the era’s most significant bruisers.

Never hurrying his way through Steven Zaillian’s zesty screenplay, Scorsese allows the action to unfold in lengthy takes with sober cameras. The busy wipes, lively zooms and fast cuts that characterised the earlier gangster flicks are not on display. This is as much the Scorsese of Silence as of Wolf of Wall Street.

And yet. Scorsese’s playful instincts are still there. Attentive viewers will enjoy glimpses of a real-life character played, in the early 1990s, by Joe Pesci with famous gusto and a famous wig (can you guess who?). This is, it seems, a universe in which, despite the presence of Robert De Niro and Al Pacino, the Godfather films exist. None of this pushes The Irishman into the post-modern, but it reminds us these film-makers are still alive to possibilities.

More controversial evidence of Scorsese’s continuing connection to fresh ideas comes with his embrace of digital de-aging techniques. Despite the film’s enormous length – at almost 3½ hours – the story is sufficiently gripping to divert attention from the old bodies creaking beneath freshly rendered heads. The effect is like a minor toothache. One can forget it for most of the day, but every now and then a twinge pulls you painfully out of the action. The later we get into the action the less it matters.

Given a free hand by Netflix, Scorsese has, perhaps, allowed himself 20 more minutes than he truly needed

De Niro makes up for some recent acting outrages with a rugged attack on an evasive character who manages an only partial examination of an often-wicked life. Pesci is touching as a bad man who wants to be liked. But it is Pacino who makes the most of the opportunity. Notably less bullish than Jack Nicholson in Hoffa, his labour boss is charismatic, funny and deliciously eccentric. Just listen to how Pacino, engaged without being hammy, pulls playfully at his vowels.

Given a free hand by Netflix, Scorsese has, perhaps, allowed himself 20 more minutes than he truly needed. But what would one ditch? Fans of James Ellroy will savour the trawl through underground history: Watergate burglar E Howard Hunt makes an appearance; the JFK assassination matters; the Bay of Pigs registers. Anna Paquin does much without saying anything. The anthropological digs in mid-century cuisine and pop culture are delightful.

It will play well on Netflix. But we hardly need to say that if you’re lucky enough to be near a theatrical screening then that’s where The Irishman should be seen. You owe it to Uncle Martin.

The Irishman opens on November 8th