Monos: This is easily one of the best films of 2019 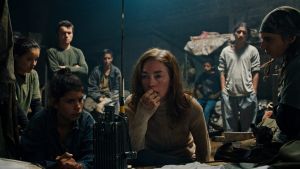 Lord of the Flies is an obvious reference for this nervy, thrilling tale of child guerilla soldiers but there’s something, too, of Werner Herzog’s Aguirre, the Wrath of God in Colombian director Alejandro Landes’s surreal, wildly beautiful third feature.

The near feral teenage commandos are known only by their nicknames – Dog, Bigfoot, Rambo, Swede, Smurf, Boom Boom, Lady and Wolf – and take orders from The Messenger, a drill sergeant (played by former Farc fighter Wilson Salazar) representing a mysterious paramilitary called The Organisation.

The Messenger departs, having okayed a romantic relationship between two of the Monos, Lady (Quintero) and Wolf (Giraldo). The young militia are tasked with watching over an American prisoner (Nicholson) and with looking after a cow called Shakira.

When Lady and Wolf consummate their relationship, bursts of celebratory gunfire lead to Shakira’s death which, in turn, leads to a chaotic and violent series of events. Their connection to the outside world or civilisation, via an unreliable radio, grows increasingly tenuous. Two distinct personalities emerge among the group: the inappropriately empathetic Rambo (Buenaventura) and the tyrannical Bigfoot (Arias).

The unnerving, unfolding drama as the guerrillas’ society disintegrates is parroted by Jasper Wolf’s dynamic camerawork as it transitions from vigorous, handheld, over-the-shoulder drill scenes to sublime mountaintop tableaux. A sequence in which Bigfoot, Lady and Boom Boom discover magic mushrooms is as ecstatic as it is eerie. The Monos’s descent from the Andes toward the soupy jungle adds to the sense of derangement, as does composer Mica Levi’s spooky electronic score.

Working from a script co-written by Alexis Dos Santos, director Landes nimbly shifts perspectives and loyalties. The Monos, as a group, are the hero (or anti-hero) of the story. Easily one of the best films of 2019.

Yungblud: ‘My generation is over being divided’
10