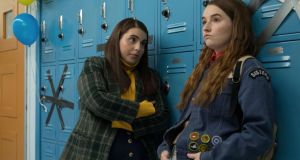 Brain boxed in: Beanie Feldstein and Kaitlyn Dever in Booksmart

BOOKSMART ★★★★☆
Directed by Olivia Wilde. Starring Kaitlyn Dever, Beanie Feldstein, Jessica Williams, Jason Sudeikis, Will Forte, Lisa Kudrow, Austin Crute, Eduardo Franco, Noah Galvin, Skyler Gisondo
Super party-party comedy featuring Dever and Feldstein as a pair of high achieving students who, as they leave high school, make up for lost time by partying like they’ve never partied before. The result is a cavalcade of mayhem that somehow manages to argue for decency in an awful world. It is the sense of discovery that sets it apart. That and its warmth, generosity and openness of spirit. A delight. 16 cert, gen release, 102 min DC

Hugely entertaining biopic of Elton John. The tunes are sung as part of elaborate dance numbers that spring spontaneously from the situation. Saturday Night’s Alright for Fighting breaks out when young Elton entertains potentially riotous punters at the pub in Pinner. And so on. Egerton is great in the lead. Madden is creepy as Elton’s manager and lover. But will you escape without having to endure Princess Diana’s funeral? No spoilers here. 15A cert, gen release, 121 min DC

“After the first death there are no others,” Dylan Thomas wrote. Yeah, you obviously didn’t live long enough to see the John Wick films, boyo. The third film in the cycle finds our hero excommunicated and on the run. The films are certainly silly and a bit vulgar, but they are masterpieces of martial choreography. We have yet to see a genuinely brilliant video game adaptation, but the Wick films do amazing work with that world’s extravagant aesthetic. And Reeves is still a delight. 16 cert, gen release, 130 min Full review DC

Breathtaking folk thriller that tells the story of an indigenous Colombian family’s destructive engagement with the drugs industry over several decades. Though not at home to sentimental notions of lost Edenic idylls, Guerra and Gallego take its characters from humble isolation to extremes of wealth and corruption. It’s the oldest story in the world: be careful what you wish for. But it has rarely been told with such imagination. Awash with magic, violence and family rivalry, Birds of Passage is one of a kind. 15A cert, IFI/Light House, Dublin, 125 min Full review DC

This Scottish drama opens with a clause from one of Britain’s most bizarre laws. Introduced by the Tories in 1994, the Criminal Justice and Public Order Bill took aim at the UK rave scene by banning music events “wholly or predominantly characterised by the emission of a succession of repetitive beats”. That clause has direct consequences for best friends Jonno (Ortega) and Spanner (Macdonald), who will soon be separated but not before one last blowout at a rave announced by a pirate radio DJ (Mann). Working from Kieran Hurley’s successful 2012 one-man play, Beats can feel overstretched. But it does a terrific job of replicating the rave scene adjacent to the Cool Britannia scene. 18 cert, QFT Belfast, 101 min Full review TB

Brilliant documentary on the recording of the late Aretha Franklin’s 1972 gospel classic Amazing Grace. The release was delayed initially by a technical error and then as a result of legal action from Ms Franklin. Its eventual arrival provides the authors of online listicles a permanent starting point when considering the 10 greatest concert films of all time. The music is transcendent. The editing is perfectly paced. The congregation offer a vital snapshot of a time and place. A masterpiece of its type. G cert, lim release, 87 min Full review/trailer DC

Other ★★★★★ and ★★★★☆ films out and about: The Dig, Eighth Grade, Float Like a Butterfly, mid90s, Wild Rose, Woman at War. All current films are reviewed here.