Too Late to Die Young review: lazy, hazy drama in the Chilean sun 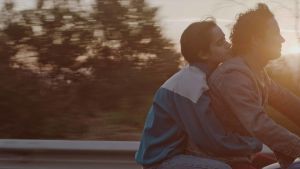 Dominga Sotomayor’s third feature is a balmy semi-autobiographical coming-of-age set in 1990, at a moment when Chile was rebuilding and recovering from the reign of Pinochet.

These larger socio-political developments have little bearing of the lives of the artists, musicians, children and dogs who live in the far-flung ecological community of Peñalolén.

It takes some time for DOP Inti Briones’s unhurried, summery shots to coalesce into a narrative as the camera drifts across a gauzy landscape, gamboling kids, and outdoor get-togethers. Lucas (Antar Machado), an aspiring teenage musician, is in love with 16-year-old Sofia (Demian Hernández), the gamine, precocious heroine. She, however, is more interested in chain-smoking, listening to Mazzy Star and flirting with Ignacio (Matías Oviedo), an older visitor with a motorbike.

Sofia lives with her quiet luthier father (Andrés Aliaga) but plans to move in with her musician mother in the city after the commune’s New Year celebrations, which her mother is expected to attend.

There are small subplots and unhurried exchanges: a young girl named Clara (Magdalena Tótoro) searches for her missing Bernese mountain dog; residents discuss the broken water mains and the possibility of connecting to the electrical grid. The glacial pace is counterpointed by wavy heat and golden, nostalgic hues. With very little dialogue, Demian Hernández conveys a sense of uncertainty, a feeling that seems to spread through the community during the crucial final party scenes.

The impressive, heartful Too Late to Die Young won the Leopard for best direction at the Locarno Festival last year, making Sotomayor the first female recipient of that award in the festival’s 73-year history. A film defined by big small moments, it definitely should not to be confused with Nicolas Winding Refn’s Too Old to Die Young, the expectedly ultraviolent Netflix series that premiered at Cannes this week.