Review: He kills everyone whose name you don’t know. It’s a masterpiece of martial choreography 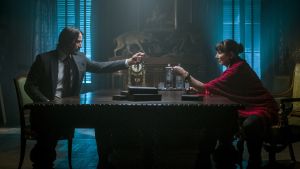 A thousand people get shot, but nobody is ever hurt

“After the first death there are no others,” Dylan Thomas wrote. Yeah, well you obviously didn’t live long enough to see the John Wick films, boyo.

If you have seen a trailer for the totally awesome John Wick 3 you will know that, at some point or other (quite early on, as it happens), our creatively violent hero (Keanu Reeves) gets to ride a horse through New York City.

All decent people will, as the bullets fly past forelocks, be pleading quietly with the filmmakers not to kill the nag. Of course they don’t. They would never do such a thing frivolously. The whole franchise was triggered by the killing of a dog and any such hippocide would not be treated lightly.

They’ll kill literally dozens of people every minute. They’ll allow Wick to shove knives straight into human eyeballs. The horse is used as a sort of firearm – you point his business end at a villain and press an imaginary button – but he’s not going anywhere near horse heaven. That’s how these films roll.

John Wick 2 didn’t have quite the psychotic invention of its predecessor, but the third film – which begins almost immediately after its predecessor – shows director Chad Stahelski back at the top of his game.

The plot is the usual cut-section baloney. As the film powers into action, we see Wick being declared “excommunicado” and the international cadre of killers being informed that he now has a price on his head. He travels to exotic places and argues with such glamorous people as Ian McShane, Anjelica Huston, Halle Berry and either Robson or Jerome. He kills everybody whose name you don’t know.

Critics have an unfortunate habit of declaring such films “high-end trash” or something similar. The films are certainly silly and a bit vulgar – every scene looks like a themed Las Vegas version of itself – but they are masterpieces of martial choreography.

Notwithstanding Detective Pikachu, we have yet to see a genuinely brilliant video game adaptation, but the Wick films do amazing work with that world’s extravagant aesthetic. A thousand people get shot, but nobody is ever actually hurt.

The film exists to devise endlessly inventive and balletic ways of beating the odds when one man is assaulted by a football team’s worth of assassins. Boy, does it succeed.

Reeves kills a man with a book. He kills a man with a horse. “I’ve been a huge fan forever, and so far you haven’t disappointed,” an admiring villain says of Wick. They can put that on the character’s tombstone and also – many, many decades hence – on Keanu Reeves’s.

Opens on May 17th