Review: An epic work of folk, gangster and other-worldly cinema about a tribal family 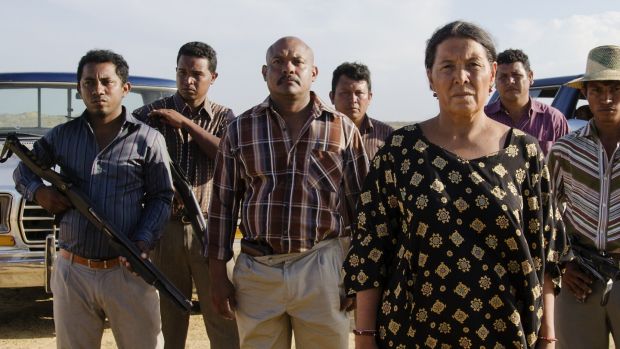 Carmiña Martínez in Birds of Passage

Once in the bluest of moons, we encounter a freshly minted classic that feels as if it has been around forever. Ciro Guerra’s Embrace of the Serpent felt like such a film. An ethnographic tragedy that understood what was wise and what was foolish about Heart of Darkness, it became the first Colombian project to receive an Oscar nomination for best foreign film.

Now working with Cristina Gallego, his wife and producer, Guerra has delivered another epic for the ages. Birds of Passage offers an odd and perfect blend of folk cinema and gangster Iliad. The American mainstream has had much to do with the drug conflagrations of the last 40 years – Scarface, Sicario, the novels of Don Winslow – but no previous work has engaged so thoroughly with the base of the ladder.

Though not at home to sentimental notions of lost Edenic idylls, Guerra and Gallego take an indigenous people from humble isolation to extremes of wealth and corruption. It’s the oldest story in the world: be careful what you wish for. It has rarely been told with such imagination.

We begin, in the late 1960s, with a tribal betrothal ritual that leads, after an elaborate dance, to Raphayet (Jose Acosta) asking for the hand of Zaida (Natalia Reyes). He will first have to cope with her fearsome, dream-reading mother Ursula (Carmiña Martínez), a character born of storms and ancient spirits.

Over the course of the picture, the film-makers – who worked closely with the Wayuu people of northern Colombia – tease out the complex gender politics of its subjects. Women are not invited to the negotiating tables, but this remains a matriarchal society that puts figures like Ursula at the head of the family. Later, when weedy men quiver, she will be unflinching in her ruthlessness.

Raphayet is required to provide an absurdly mountainous dowry: cows, beads, goats and so forth. Help comes when he and his pal encounter some Peace Corps hippies in search of marijuana. They are astonished at how much profit they make. A few years later, Raphayet and his associates are flying gear out by the planeload.

Our hero becomes conspicuously wealthy, but he remains bolted to the tribal soil. A ranch-style mansion – soullessly luxurious inside – sits isolated with nothing but plains as far as the eye can see. The clan has profited from the cocaine boom of the 1970s and 1980s, but they have not become part of the narco-elite in Miami or Bogotá.

Inevitably, Raphayet is violently parted from early associates, but it is in the succeeding generation the corruption really sets in. His dim, dissolute son – more of a Fredo Corleone than a Sonny – looks set to bring chaos about the family’s ears.

The narrative has many such superficial similarities to that of The Godfather. But the manner of telling sets it apart from that film (and almost all others). Divided into five “cantos” – Wild Grass, The Graves, Prosperity, The War and Limbo – Birds of Passage plays out to the leisurely rhythms of the abundant folk music. The grammar of the traditional action thriller has been replaced with a cautious, morally responsible tone that invites no celebration of violent outrages. What matters is how the killings alter the killer. Trucks arrive over the horizon as posses once did in westerns. The growing menace feels spiritual as well as practical.

Those with understandable allergies to magic realism may balk at traces of the mystical that punctuate the picture. Portents matter; ghosts might be real; the tribe’s rituals look to be more than empty traditions. But that sense of the other-worldly is what sets Birds of Passage apart from all previous engagements with this complex, still-controversial story. The eternal and the transient merge convincingly.