Amazing Grace: Finally ... Aretha Franklin in one of the greatest concert films ever

Review: Franklin’s 1972 recording was tied up in technical and legal problems for decades

The official trailer for Amazing Grace, a previously unreleased film from Aretha Franklin's recording of the album of the same name in a Los Angeles church in 1972. Video: Neon 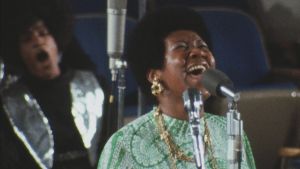 If we may introduce a profane note in a sacred place, the much-delayed release of this essential documentary provides the authors of online listicles a permanent starting point when considering the 10 greatest concert films of all time. Add in Stop Making Sense and The Last Waltz and you’re nearly a third of the way there already.

Then again, you could (if you were being awkward) argue that Amazing Grace doesn’t quite meet the definition. In January 1972, Aretha Franklin arrived at the New Temple Missionary Baptist Church in Los Angeles to tape what was to become the legendary gospel album Amazing Grace.

We see the congregation listening, rapt, as they are told how the evening will pan out. The event is partly a concert, partly a recording session (the film gives us a few false starts) and partly a religious service.

No matter. Amazing Grace is miraculous in its depiction of raw emotion emerging from rigorous preparation. It is only fitting that it was raised from the dead to join us in its grainy immediacy.

Caught between Jeremiah Johnson and The Way We Were — neither film an obvious companion piece to Amazing Graze — Sidney Pollack volunteered to record the session for posterity. His inexperience in documentary was confirmed when he failed to use clapperboards, thus rendering it impossible to sync audio and image.

The project lay dormant until 2007 when producer Alan Elliott purchased the footage and began the exhausting task of retro-fitting the music with the pictures.

A release was planned for 2011, but Franklin sued for appropriation of her likeness. My learned friends intervened before another planned premiere at the 2015 Telluride Film Festival. Only on Franklin’s death could the film go before audiences.

Keeping with the post-nouvelle vague spirit still about in 1972, the current cut makes no attempt to conceal the camera crew and assorted professionals. Inadvertently or not, a point is made. Virtually everyone from the Warner Brothers team — including Pollack in inevitable leisure wear — is Caucasian, whereas virtually everyone on stage or in the congregation is African-American (we’ll get to one notable exception in a moment).

Spike Lee, a producer on this release, will surely have raised an ironic eyebrow at the unbroken snowiness of the filmmakers.

In between renditions of hymns and contemporaneous, sanctified pop, we get to see the Reverend James Cleveland, a gospel legend, priming Aretha and the Southern California Community Choir with the precision you expect from any great specialist.

It’s always a treat to watch experts at work, especially when they assist in the creation of art that sounds so passionately spontaneous. Gospel enthusiasts might argue that this is Aretha at her purest. There is certainly an overpowering surge from reverence to adulation that you don’t hear in her pop performances.

That does not make the sacred music any more valuable than her immortal singles. But Amazing Grace confirms that Aretha’s gifts were often reigned in.

The congregation needs no encouragement to embrace the rhythms and the revelations. Pollack’s light 16mm cameras move energetically up the aisles as the crowd claps and rocks in unison. It is to the filmmakers’ credit that they allow only a few brief glimpses of an enraptured young white man with flapping hair. This evening really doesn’t belong to Mick Jagger (for it is he).

There remains one mystery at the heart of the film. We get a sense of Cleveland’s personality. Reverend CL Franklin, the headliner’s dad, reveals something of himself in his address and a little more when, mid-performance, he steps up to mop his daughter’s brow.

But Aretha herself remains stubbornly, resistantly unknowable. She says little. She expresses herself only through her music. There is something refreshing about that in an age when celebrities feel required to reveal their wounded innards at every turn.

A boiling classic for the ages.