The Lady Eve: A flawless screwball comedy with a delicious parting shot 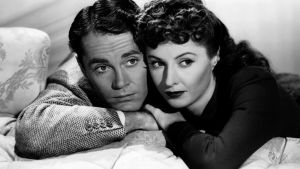 Barbara Stanwyck and Henry Fonda in ‘The Lady Eve’

As amateur ophiologist Charles Pike leaves the Amazon jungle after a year-long expedition, a chum tells him to be wary of dames. “You know me, Mac,” offers Charles cheerfully. “Nothing but reptiles.” Sure enough, Charles, the bumbling heir to a brewery fortune, seems blissfully unaware of the many “dames” who flutter and fawn in his presence until he falls – quite literally, after she sticks her foot out on purpose – for the streetwise Jean (Barbara Stanwyck).

For Jean and her smooth-talking father Colonel Harrington (Charles Coburn), Charles – or Hopsie to his friends – is just another mark, until, of course, he becomes more than a mark. Unhappily, Hopsie gets wise, just as Jean gets soft.

Take two and Jean has reinvented herself as Lady Eve Sidwich, a British aristocrat. She has revenge in mind: I need him, she says of Hopsie, “like the axe needs the turkey”. Despite the protestations of the hero’s faithful, roughneck valet Muggsy (William Demarest), Hopsie insists that Eve must be a different girl.

Jean’s delicious revenge, in which she recounts a string of former husbands and lovers to the shocked and virginal Hopsie, has the desired effect. Stanwyck’s femmes would seduce other marks, notably Gary Cooper in Ball of Fire and Meet John Doe and Fred MacMurray in Double Indemnity, but none as wide-eyed and catastrophically clumsy as Fonda. He attributes this fumbling to the effects of Jean’s perfume: “I’ve been up the Amazon for a year . . . they don’t use perfume.”

Suspension of disbelief is required for the thin rouse and for Fonda’s wild pratfalls, but the dynamic between the wise-cracking heroine and her “bewitched and bewildered” victim blazes up the screen. A hilariously sexually charged sequence with shoes prods playfully at 1940s censorship codes, and Garden of Eden allusions lurk in every scene.

This flawless screwball comedy was writer-director Preston Sturges’s first commercial hit and saw the Connemara-born writer Monckton Hoffe shortlisted for an Academy Award. The final punchline is the best parting shot this side of Some Like It Hot’s “Nobody’s perfect”.

Can a work of fiction about the Holocaust be inaccurate?
9 Welcome to the child sex capital of Europe
10