New this weekend: If Beale Street Could Talk, All Is True, Boy Erased, 1985 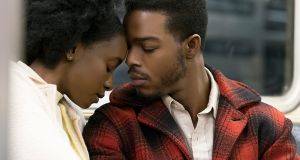 Couple retreats: KiKi Layne and Stephan James in If Beale Street Could Talk

Charming, tender study of Shakespeare’s final days starring a big-nosed Branagh as the great man and Dench as his long-suffering wife. Written by Ben Elton, the film sits in odd relation to the author’s Shakespeare sitcom Upstart Crow. Branagh’s direction is not always subtle, but for the most part this is a balanced drama concerning the perils of unfettered contemplation in later life. As Shakespeare digs his garden, he fails to process accumulated regrets or push away ancient sorrows. Full review DC

The sophomore feature from actor-turned-director Edgerton is an effective, starry adaptation of Garrard Conley’s gay conversion memoir. It’s beautifully crafted and acted, with particularly impressive work from the magnetic Hedges and Kidman, who conveys the internal conflict of mother realising that she will have to choose between her faith and her son with a series of blinks and tiny movements. But one can’t help but yearn for more of the genre punch that characterised Edgerton’s 2015 directorial debut, The Gift. TB

This lovely, heartbreaking drama follows Adrian (Smith), a young New Yorker, who returns to his small Texas hometown to visit with his family for Christmas. His doting mother (Madsen) fusses while his brusque veteran father (Chiklis) harrumphs. Adrian, we come to realise, has returned home to tell his family that he has Aids. They are religious, conservative and do not even know that he is gay. Writer-director Yen Tan offers no easy solutions, relying instead on a stellar cast and small details. Madsen and Chiklis have seldom been better and, thanks to Smith, the viewer feels every beat of Adrian’s broken heart. TB

McCarthy excels as boozy Lee Israel, the real-life biographer of Estée Lauder and Tallulah Bankhead, who, in the early 1990s, launched a second career as a forger of literary correspondence. Grant (like McCarthy, Oscar-nominated) is her even boozier, serially untrustworthy pal. The compactness of Can You Ever Forgive Me? has invited inevitable under-appreciation. It’s a great New York movie. It’s a great film about friendship. It’s also a great cat movie (if that’s your bag). Full review/trailer DC

One of the most positively reviewed film in Cannes history, Lee’s adaptation of a slim Haruki Murakami story concerns an awkward love triangle between a shy young man, his occasional lover and her new, more sophisticated boyfriend. It’s not zippy. The characters are opaque. The narrative uncertainties and the social uneasiness contribute to a drama that delights in frustrating expectations. An impressive follow-up to the director’s Poetry. Full review DC

Other ★★★★☆ and ★★★★★ movies out and about: Bohemian Rhapsody, The Camino Voyage, Colette, The Favourite, Free Solo, How to Train Your Dragon: The Hidden World, Spider-Man: Into the Spider-verse, Stan & Ollie

‘In five seconds my life changed. I was worse than the worst jazz snob’
8

Leg warmers and legal rows: Behind the scenes of St Petersburg’s Swan Lake
9