The Irish actor (24) plays Mary Stuart, who is attempting to usurp her cousin Elizabeth I

The first trailer for Mary Queen of Scots has been released, starring Saoirse Ronan and Margot Robbie. Video: Focus Features 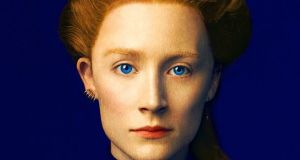 Saoirse Ronan and Margot Robbie fight for the British throne in the first trailer for Mary Queen Of Scots.

In the film, Mary Stuart — played by Ronan — is attempting to usurp her cousin Elizabeth I, played by Robbie, and raising up an army to help her take her place as sovereign of England.

The trailer details the initial friendship between the two women, which developed into a deadly rivalry for the throne.

It also shows Mary pleading with Elizabeth: “Do not play into their hands, our hatred is precisely what they hoped for.

“I know your heart has more within it than the men who counsel you.”

When Elizabeth warns her to watch her tongue, Mary retorts: “I will not be scolded by my inferior.

It will be released in UK cinemas on January 18th.–PA