The Secret of Marrowbone: it’s familiar, but not always eerily familiar 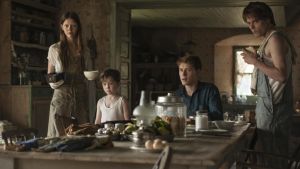 Film Title: The Secret of Marrowbone

Sergio G Sánchez, hitherto best known for writing JA Bayona’s influential horror film The Orphanage, has not moved far from his discomfort zone with his debut as director. Set in a dusty, timeless corner of the United States, the picture conveys the same interest in crumbling piles stuffed with shadowy corners that point to secret outrages. Henry James and MR James are again recalled. There’s a bit of Edgar Allan Poe in here too.

It’s a shame Sánchez didn’t stretch himself a little more. Featuring George MacKay as the young head of an apparently cursed family, the film makes at least one depressingly hackneyed narrative turn and relies on too many visual ticks familiar from Bayona’s superior film. It’s familiar, but not always eerily familiar.

The better news is that Sánchez has cast his film well. We begin with an Englishwoman – frightened of something uncertain – moving her family of four children to rural America.

Before dying, she makes Jack (MacKay), not yet of age, promise to keep her death a secret until he is legally allowed to assume the role of guardian. Charlie Heaton, seen recently in Stranger Things, is excellent as the confused middle son. The reliably peculiar Mia Goth is better still as a teenage sister.

Sánchez makes interesting designs in the margin of his story. Jack falls for a neighbour (Anya Taylor-Joy), with whom, using a torch, he communicates in Morse code. An unpleasant young lawyer (Kyle Soller) distrusts the family and plots to bring about their downfall. While all this is going on, the younger siblings worry about an apparent ghost in the attic.

The film is set in 1969 but, focused largely on a creaking farmhouse with few amenities, the events could be taking place at any time in the last century. That otherness helps add to a weird atmosphere that almost makes up for the unsurprising revelations in the closing stages.

There are reminders here – as there were in the recent Irish horror The Lodgers – that the haunted house movie still contains possibilities. Neither will it, however, keep you awake at night like The Orphanage.

Cancel culture: can you defend people who say unpopular things?
9