Lost & Found: Most appealing film yet from Ireland’s maverick moviemaker

Review: Liam O Mochain is at the centre of his omnibus film’s daisy chain of stories 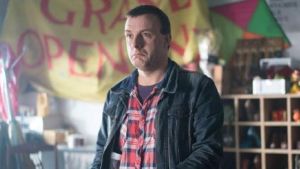 Liam O Mochain, Ireland’s most maverick moviemaker, burst on to the scene in the late 1990s with a series of filmed festival reports and a scattershot, self-reflexive debut feature called The Book That Wrote Itself, featuring improbable cameo appearances by George Clooney, Warren Beatty, Catherine Deneuve and Kenneth Branagh.

For the past two decades, the Limerick-born hyphenate has kept on trucking, with film and TV credits across multiple departments, including cinematography and music production. He even designed the title sequence for his sophomore feature, WC.

His making-of shorts and featurettes make for fascinating and heroic viewing, and when it arrives The Making of Lost & Found is sure to be entertaining. Shot over six years at Portarlington train station, O Mochain’s third feature is his most appealing work to date.

Lost & Found is that most unfashionable of things: an omnibus film, comprising seven interconnecting stories, with O Mochain at the centre of the daisy chain as a likable loser named Daniel.

The vignettes breeze by at a sprightly pace. An older man begs for train fare to Dublin. Daniel’s cranky employer Paudge keeps refurbishing his unpopular pub. A marriage proposal at an airport goes hideously wrong. On her deathbed, Daniel’s grandmother recalls the Kindertransport, sending him off to Poland for an unlikely treasure hunt. Bridezilla Síle is determined to keep her booking at a wedding venue, even though she no longer has a willing groom.

Some of the performances are better than others. And the long production period means that facial hair is apt to disappear from scene to scene. But O Mochain gets the hard part right in maintaining a very whimsical tone, whether he’s presenting a wedding or a wake. That’s all the more impressive when one considers that Lost & Found touches on the Holocaust and Alzheimer’s, somewhere between a ghost story and a wedding.

It helps that the writer-director has assembled a good creative team, including the cinematographer Fionn Comerford and the editor Ciara Brophy.