Incredibles 2 is as brilliant as the original – better in parts

Review: You’ll gawp. You’ll ponder. And you’ll laugh the way only Pixar can make you 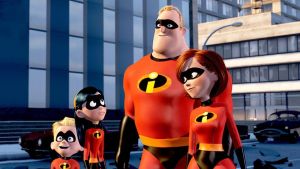 A lot has changed since Brad Bird gave us The Incredibles in 2004. Acknowledging changes in the present, the new film nods grimly towards an authoritarian state and – only a tad hypocritically – attacks our increasing addiction to screens.

The past has changed too. Both films are set in a version of the early 1960s that swings between idealisation and retrospective disapproval. In the years immediately following The Incredibles’ release, Mad Men and its successors positively fetishised that era, and Incredibles 2 now looks to be offering variations on a variation. It does so with enormous élan. The pistachio motels with their neon incantations could hardly be more evocative. The slim lapels and the polo shirts call out for Rock Hudson. Or Donald Draper.

After a terrific initial confrontation with old enemies, the Parr family – The Incredibles when suited – find themselves in trouble with those government jobsworths who are always trying to shut down superheroes.

Deprived of funding, they are moping in a motel when Winston Deaver, a tech billionaire and superhero enthusiast, suggests they embark on a PR stunt. It’s all about perception. Advised by his cleverer sister Evelyn (smooth in Capri pants and ragged pageboy haircut) they agree to participate in various staged rescues.

Much of the negotiations take place between Evelyn and Helen Parr over glasses of brown liquid in tastefully arranged offices. There surely can never have been an American family animation with more boozing. The minders decide that Elastigirl, as Helen becomes when danger calls, is the more easily marketable asset and send her in pursuit of endangered bullet trains.

Bob Parr, the sometime Mr Incredible, is left at home with young Violet (who turns invisible), younger Dash (who moves speedily) and baby Jack-Jack (who does a lot of things).

Indeed, there is something of a contemporaneous sitcom about the initial domestic set-up. A man has to cook dinner and deal with teenage traumas. Ha ha! How will super-Dick Van Dyke cope? One should not, however, dismiss the notion that these clever film-makers are consciously interrogating those ancient structures. Even if that isn’t in their heads, the jokes are so brilliantly organised that the creakiness hardly matters. There is delightful conflict with an inquisitive racoon. Bob’s efforts to manage his daughter’s first crush go deliciously wrong.

While all this is happening, Elastigirl is being drawn into a diabolical scheme that involves a mysterious villain called Screenslaver. Did you get that? The film that was created on a thousand small screens to be projected on a thousand big ones is concerned that we may be watching too many screens. It’s a sideways gag in a plot that unfolds with great momentum towards a satisfactorily noisy denouement. The explosions are the equal of any in You Only Live Twice.

In recent years, Pixar has struggled with sequels – Monsters University and Finding Dory were so-so at best – but, happy to relate, Incredibles 2 lives up to, and occasionally surpasses, its predecessor.

Some novelty has been lost. There is little of the emotional oomph of the Toy Story movies. But Pixar has rarely staged action sequences with such coherence and such panache. If the first film had a flaw it was that, in its later stages, it became bogged down in confusing, generic superhero punch-ups.

Incredibles 2 never forgets to surprise us and always ensures we know who is thumping whom. The animation is glossier than ever. The design is so gorgeous you yearn to wear it home.

It is, however, the jokes that really stand out. You’ll gawp. You’ll ponder. You’ll laugh. A Pixar flick would be nothing without the last.

Say ‘whistleblower’ and the Irish hear ‘informant’ or ‘snitch’
6

Cuties controversy: If you haven’t seen it, you don’t know what you’re talking about
8

The vanishing art of the book launch
9