First Reformed: Ethan Hawke is a marvel of subtle anguish

Review: You won’t see a more textured movie this summer than this Paul Schrader film 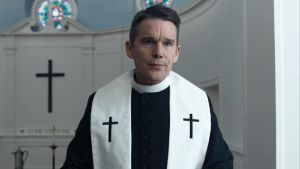 Paul Schrader examined the work of Yasujir Ozu, Robert Bresson, and Carl Theodore Dreyer, in a 1972 book under the heading Transcendental Style. The meditative First Reformed, Schrader’s 21st film as a director, is as transcendental as anything he has ever made.

Reworking the malady of Robert Bresson’s Diary of a Country Priest and the plot of Ingmar Bergman’s Winter Light, First Reformed concerns Reverend Toller (Hawke), the minister of a small church maintained more for its historical significance — once a stop on the Underground Railroad, it’s about to celebrate its 250th anniversary — than its single digit congregation.

He keeps a mournful diary. His son, Joseph, died in the Iraq War. His wife left him, as it was Toller who encouraged Joseph to enlist.

Most locals attend Abundant Life, the nearby megachurch run by the charismatic Pastor Jeffers (Cedric Kyles). A young couple – Mary (an impressive Amanda Seyfried) and Michael (Philip Ettinger) – come to First Reformed because Michael believes Abundant Life is “more of a company than a church.” Michael is an environmental activist who has been discharged from prison on compassionate leave to look after his heavily pregnant wife. Instead, he is pressurising Mary to have an abortion rather than bring a child into a world that, he believes, is on the verge of environmental cataclysm.

Mary asks Toller to intervene and he finds a man that talks a good deal of sense. “My children will experience this unliveability,” argues Michael. Mary soon discovers that Michael is building a suicide bomb in their garage. Not long after, Michael kills himself. Toller finds the body.

Toller and his diary oscillate between despair and rage, but his feelings for Mary may just be deep and warm enough to provide some kind of redemption. For the moment, he is falling apart. His stomach aches and there’s blood in his urine, but these physical ailments are nothing compared to his very Kierkegaardian soul sickness.

Schrader counterpoints the film’s weightier philosophical concerns with grindhouse nous. One particularly surprising sequence – although a little undone by slightly shabby CGI – is puzzling in the best possible sense.

Alexander Dynan’s cinematography is characterised by simple, uncluttered compositions. Hawke is a marvel, simultaneously conveying all kinds of anguish, in small movements and sounds. You won’t see a more textured film this summer.