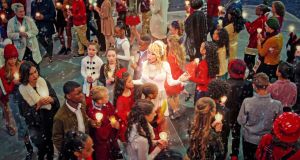 DOLLY PARTON’S CHRISTMAS TIME ON THE SQUARE ★★★☆☆
Directed by Debbie Allen. Starring Dolly Parton, Christine Baranski, Treat Williams, Jenifer Lewis. Netflix, 98 min
A New Yorker (boo) returning to the small town where she grew up, Regina (Baranski) has plans to evict the entire community on – wait for it – Christmas Eve! But what about lovable moppet Violet? And what about Pastor Christian and his perma-smiling wife? What of Regina’s old flame (Williams) and his tatty knick-knacks shop? What about Dolly as the local bag lady? Yes, it’s another silly but utterly delightful seasonal special inspired by Dickens’s most popular work. Good songs. Good spirits. Good times. TB

Terrific, beautifully shot absurdist comedy from Belgium concerning the manager of a nudist colony who will stop at nothing in the pursuit of his missing hammer. Among the many wonders of this captivating film is that it never gives into whimsy. It can endure Jemaine Clement as a visiting pop star called Dustin Apollo without missing a beat. The nakedness is mostly incidental, but occasionally played up for dry comedy. An absolute original that should launch director Mielants towards a starry career. DC

Documentary based around the 2015 fire in a Bucharest nightclub that killed 27 young rock fans. As an astonishing, urgent portrait of investigative journalism – and a timely reminder that cronyism isn’t a victimless crime – Collective concerns a fast-breaking news story, systemic corruption, government spin, and a sad retreat to the certainties of established, if rotten, political parties. A scripted drama couldn’t make it up; ssential viewing for anyone with an interest in checks and balances. TB