An exclusive preview from the forthcoming documentary Finding Jack Charlton. It looks at the renowned Irish football manager's life and his later struggle with dementia. 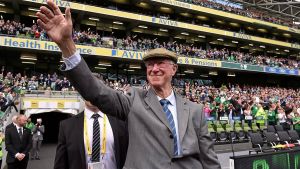 Jack Charlton at a friendly between the Republic of Ireland and England at the Aviva Stadium in 2015. Photograph: David Maher/Sportsfile

Such is the affection for Jack Charlton in this country that a documentarian need only point the camera at a still image of the great man to generate enormous DVD sales at Christmas.

Charlton didn’t just push the Irish football side to hitherto unimagined glories. His achievements helped (ahem) kick off a cultural renaissance that changed the nation more in 10 years than it had been transformed in the previous 50. By the end of the 1990s we had just about accommodated ourselves to success.

Gabriel Clarke and Pete Thomas have resisted all temptations to tread water with a charming film that bolsters the legend without giving in to hagiography. The elegant juxtapositions — Jack struggling with dementia in the years before his recent death, Jack as a footballer, Jack as a manager — remind us he is the only member of the 1966 England World Cup squad to achieve even greater adulation in subsequent decades.

Though the directors, of course, cover that famous final at Wembley, the edit skews more towards Jack’s time with the Republic of Ireland. Nobody dares argue that those were anything other than his glory years (though Eamon Dunphy here adds some salt to the stew).

A minor miracle of economy, Finding Jack Charlton somehow covers all the key bullet points you’d expect in any summary of this extraordinary career. The camera finds footage of a fan holding a banner reading “Go home, Union Jack” after the controversial appointment of an Englishman as manager. David O’Leary turns up to politely remind us of the tension between himself and Jack. “I have always been suspicious of a centre back who can play,” Charlton says of O’Leary, thus redefining definitions of “back-handed compliment”.

The Dunphy punch-up gets its own compelling corner. We see Eamon rolling his eyes after the Egypt game at the 1990 World Cup and then hear Charlton refusing to be anywhere near him at press conferences. “Silly and boorish,” one otherwise supportive contributor says of that reaction.

These acknowledgments of the subject’s flinty side serve only to bestow greater integrity on a largely celebratory portrait. For most of the duration, the average viewer will find themselves marvelling that such a man ever walked the earth.

His relationship with Paul McGrath is explored with particular sensitivity. An aerial camera catches the footballer over a lonely beach as he talks us through his struggles with alcoholism and Charlton’s caring, uncomplicated support. Focusing on a mounted display of Charlton’s scribbled notes, the camera teases out the workings of a deceptively subtle mind.

It is, however, his remarkable connection with the Irish psyche that most stirs the emotions (and the nostalgia glands). Larry Mullen is here to remind is that, at a time when the Troubles were still raging, the football supporters of 1990 and beyond “took the flag back from violent Republicanism”.

A working-class lad from the North-East of England, Charlton, more gregarious than his younger brother Bobby, never had the slightest problem communicating with ordinary Irish people. Roddy Doyle notes that, in the years that followed — the years of Riverdance, boybands and economic boom — “a way of perceiving ourselves … had changed”. Maybe that started with The Joshua Tree. Maybe with My Left Foot. But it shifted up a gear with Italia ’90, and that sporting success is unimaginable without Jack.

The emotional centre of the film cuts between the famous penalty shoot-out with Romania and Charlton, now deep in dementia, casting flies on a peaceful river. Pat Charlton, his wife of 62 years, is strong and lucid in her discussions of his confusion. “It’s a shame because he had good memories,” she says with some understatement.

Nothing in a film filled with sadness and joy is quite so moving as the scene that finds Jack looking, somewhat baffled, at footage of the Irish team on a laptop. Recognition suddenly hits and he focuses in on one still-familiar figure

Available to stream on digital platforms from November 23rd.