He was a fascist who walked out on the family. No wonder the star had father issues 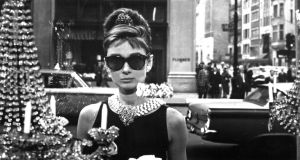 The good people of Dublin 4 may need smelling salts on hand before sitting down to Helena Coan’s new documentary on Audrey Hepburn. Discussing the actor’s late encounter with her estranged father, a contributor refers to him as living in a “nondescript place”. That place was Sydenham Road, just opposite the Royal Dublin Society in Ballsbridge. Estate agents all over that leafy locale will be clutching pearls as they collapse theatrically in elegant, airy rooms with easy access to shopping and amenities.

The story of Joseph Hepburn-Ruston’s life in Ireland has been dredged up in numerous newspaper articles. As the new film – economically titled Audrey – confirms, Hepburn-Ruston, an Englishman living in Belgium at the time of his daughter’s birth, expressed unqualified enthusiasm for Hitler in the years before the second World War. He left Audrey and her mother, a Dutch aristocrat, in 1939 and, after detention in the Isle of Man, made his way to Dublin where, assisted by the Carmelite order, he found lucrative work in the insurance industry.

As Hugh Oram noted in this newspaper 13 years ago, Hepburn-Ruston ended up friends with the Guinness family and Sir Alfred Beit, the art collector and philanthropist. He and his wife, the model Fidelma Walshe, were living near Merrion Square (an even less nondescript location than Ballsbridge) when Audrey first reconnected in the early 1960s.

To even mention this association is to risk accusations of wrapping a Tricolour around the Hepburn legend. But one of the key arguments in Coan’s film is that Audrey’s initial estrangement from her dubious right-wing father defined much of her career and private life. Contributors suggest she was looking for a dominant figure in her two marriages and that the parental vacancy always hung over her professional decisions. Her father was a supporter of Oswald Mosley’s Blackshirts in the years before the war. Audrey spent the last decades of her life working tirelessly for Unicef. The contrast is marked.

None of this was in anyone’s mind when she became the face of the 1950s and – as Peter Bogdanovich suggests in Audrey – an eventual contender for the last great star minted in Hollywood’s Golden Age. The uncertainness of her nationality helped spread the appeal across continents. She sounded English and, indeed, her first acting roles were in British films such as Young Wives’ Tale, Laughter in Paradise and The Lavender Hill Mob.

Decades later, playing opposite Cary Grant in Charade, she gave the impression that, like her co-star, she was becoming one of those European actors who travel comfortably in the outer streams of American culture (George Sanders and Ray Milland were others). She was born in Belgium but spent the war years in her mother’s then-occupied Holland. Nobody else spoke like her. Nobody else held herself that way. She is, perhaps, best described as a citizen of Greater Hepburnia.

Starved to the point of malnutrition in the later years of the war, she attempted to make a career as a ballerina, but, by her own later admission, she didn’t quite have the chops. While studying at the Ballet Rambert in Notting Hill, she drifted towards acting and, shooting in the south of France, was spotted by the novelist Collette, who manoeuvred her into the Broadway adaptation of her novel Gigi.

Then came one of the most spectacular debut leads in Hollywood history.

“She had everything I was looking for: charm, innocence, and talent,” William Wyler said upon seeing her screen test. “She also was very funny. She was absolutely enchanting, and we said: ‘That’s the girl!’”

The pleasures of Wyler’s Roman Holiday are undimmed today. Hepburn is impeccable as the princess from an unnamed country (Hepburnia, perhaps) who, on the lam during a state visit to Rome, falls for Gregory Peck’s charming, financially embarrassed journalist. You will still see posters for the film in every second Roman souvenir shop. Audrey charmed the universe and, to the surprise of many, beat Ava Gardner and Deborah Kerr to the best actress Oscar in 1953.

Revisionists occasionally pop up to suggest that Hepburn was more of an icon than an actor, but that first star turn – and later performances in Sabrina and Breakfast at Tiffany’s – confirm that she was a comedienne of some genius. Unusually for someone so associated with “chic”, she brought a warmth to her characters that cheered up even her weaker films.

It is, nonetheless, true that Hepburn – who formed a vital partnership with designer Hubert de Givenchy – embodied, for 15 years or so, a particular class of postwar glamour: insouciant, neat, ordered, civilised. Though Breakfast at Tiffany’s is a deeply flawed film (and not just because of Mickey Rooney’s jaw-dropping racist caricature of a Japanese man), the opening shots of Hepburn before the titular jewellers (now next door to Trump Tower, misery fans) offered, in 1961, the last glorious hurrah for a little-black-dress aesthetic that the swinging generation was poised to gobble up.

Her career also exemplified much that was wrong with Hollywood’s gender politics. At the height for her fame she was – ironically for an actor with father issues – repeatedly cast against actors significantly her senior. Humphrey Bogart was nearly 30 years older in Sabrina, as was Fred Astaire in Funny Face (indeed, both were born in the 19th century). Gary Cooper was 27 years older in Love in the Afternoon. Cary Grant was 24 years older in Charade. What a pleasure to see her play opposite relative whippersnapper Albert Finney in Stanley Donen’s delightful Two for the Road from 1967.

By then her career was, however, undergoing eclipse. Her last genuine smash was My Fair Lady in 1964. The documentary confirms how hurt she was that the producers insisted on dubbing her singing voice and alludes to one of the great revenges in Oscar history. Hepburn secured the role that Julie Andrews – never knowingly dubbed – created on Broadway, but the English performer got the last laugh when, in the same year, she won best actress for Mary Poppins (Hepburn wasn’t even nominated).

It seems that Hepburn consciously stepped away from acting and towards her long second career as a humanitarian campaigner. She hated being famous and asked friends to lie when, out shopping, they were asked: “Is that Audrey Hepburn?” Coan’s film suggests that she was thus foreswearing a host of tasty roles, but, in truth, the new Hollywood of the late 1960s and early 1970s wasn’t kind to female stars in their middle years. Would Scorsese or Coppola or Altman really have accommodated Audrey Hepburn? They didn’t do much for her contemporaries.

At any rate, we got one great late performance opposite Sean Connery in Richard Lester’s delightful Robin and Marian from 1976. She was still a few years short of 50, but already she was cast as the creaky spirit of a bygone age. (As Robin Hood, Connery, a year or two younger, was also playing a relic.) Bogdanovich cast her in the fascinating They All Laughed (1981). Steven Spielberg found her a ghostly role in the likable Always in 1989.

Four years after that she died, too young, at her beloved home in Switzerland. She had supported her father financially until his death in Baggot Street Hospital a decade earlier. Hepburnia was everywhere.

The untold story of River Phoenix, 25 years after his death