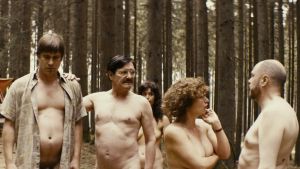 Patrick is set in a nudist colony

Thoughts of John Boorman’s very different Point Blank crop up as the protagonist of Tim Mielants’s excellent absurdist comedy makes his way about a nudist colony in the Ardennes. Lee Marvin just wanted his money. “I just want my money,” he said. Patrick (played with blank puzzlement by Kevin Janssens) just wants his hammer. “My hammer is missing,” he says to anyone who will listen.

Bereaved early on, Patrick may have sublimated grief on to the stolen tool, but it is equally likely that he just misses the sense of order. His array of beautifully kept, shiny hammers now has a yawning space at its centre. Who wouldn’t want it back?

That image of the tools lined up in an attractive row is typical of a film that revels in the well balanced image. Often shooting with large depth of field, cinematographer Frank van den Eeden creates an ochre 1970s (or thereabouts) that occasionally has hints of comic Caravaggio.

Within that world we find the puzzled, slightly sat-upon adult man who seems only peripherally interested in his family’s nudist business. Dad is a hulking presence on the point of death. His mum is little more communicative. Patrick exchanges sexual favours for jam, but his enthusiasm for the carnal act is dwarfed by his passion for tools that drive in nails.

Among the many wonders of this captivating film is that it never gives into whimsy. It can endure Jemaine Clement as a visiting pop star called Dustin Apollo without missing a beat. He gets to do with a guitar in a nudist colony what Peter Sellers did with the same instrument and the same locale in A Shot in the Dark, but only the worst spoilsport would object to the borrowing.

Mielants, a director of Peaky Blinders, creates such an original tone that any allusions or influences feel incidental. For the most part the director allows the nudity to seem mundane, but, every now and then, he reminds us of the (ahem) naked truth. The camera pulls up from a boules game to show a line of flaccid penises. The late brawl in a caravan somehow combines the broadness of Borat with the physicality of Eastern Promises.

All the performances are strong. The visual game is strong. The tentative nudges towards the sinister never detract from the humour. An absolute original that should launch Mielants towards a starry career.

Patrick is streaming on various platforms from November 20th