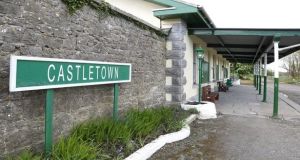 “Well now, I’ll begin at the beginning. A fine soft day in the spring it was, when the train pulled into Castletown, three hours late as usual, and himself got off.”

Thus intones the narrator as John Wayne alights in a fug of steam for the opening scene of John Ford’s classic 1952 film The Quiet Man, which was filmed at the train station at Ballyglunin, Co Galway.

The train line was shut by Córas Iompair Éireann in 1976 and the station fell into disrepair, abandoned and ignored until 2004, when a group of locals got together and began what became the Ballyglunin Railway Restoration Project. The project has a 10-year lease on the station, which is still owned by CIÉ.

The group’s mission is to bring it back to its former glory and turn it into a community hub, where locals can gather, put on plays and host community events. Ideally, it hopes to hire someone full time to look after the station, to act as a tour guide, and help it contribute to the local economy.

Tomorrow [Sunday] the group will hold an open day to showcase the restorative work it has carried out over the last 15 years.

Project treasurer Mark Gibson says while it may not look like much on the outside, a lot of work has been completed.

“In 2006, the storehouse and the signal cabin were restored. Last year, the station got a completely new roof. We also restored the windows, gutters and painted some of the inside walls. This is a protected structure so everything has to be overseen by a conservation architect.”

Gibson originally joined the group in 2009. “There was the threat of the building falling into ruin, and I felt that this is an important part of Ireland’s film history and the fabric of rural Ireland,” he says.

“I find it hard to sit idly by and watch something fall into decay, when it has so much potential, not just as a community centre but also as a hub for the region. Galway attracts 2.6 million visitors every year, but the vast majority of those people visit the ‘big attractions’ like Galway city and Connemara.”

He notes that Fáilte Ireland recently said the tourist industry needs to diversify. “If we want to achieve that, we have to put in resources to enable communities to contribute,” he says, while acknowledging the donations from both Quiet Man fans and local people.

The project has garnered international attention. An American tourist who visited Ballyglunin station later shipped €200,000 worth of timber from his yard in Tennessee to Ireland for the project.

Wayne’s co-star in The Quiet Man, Maureen O’Hara, endorsed the project before her death in 2015 while Liam Neeson has voiced support for its fundraising efforts.

In 2013 Chicago playwright Frank Mahon allowed his theatre adaptation of The Quiet Man to be performed by local drama group Abbey Acts in the station storehouse.

But the station’s fate is uncertain due to two competing demands. Some locals want the railway line to be reopened, providing a vital transport link for the rural community, while others want to turn the old line into a greenway, thereby boosting tourism.

Irish Rail’s corporate communications manager Barry Kenny says the current programme for government provided for a study on reopening the Athenry to Claremorris rail line. “Iarnród Éireann has been requested by the Department of Transport to undertake the independent review of the extension of the Western Railway Corridor.”

The review, which formally began last month, is due for completion in mid-September.

No matter what it is, locals are determined “Castletown” will have a future.

Volunteer Leonie Finn says that preserving the station is important because of how culturally significant it is. “If you were passing here and it was left derelict . . . you’d think, ‘we should have done something’. At least we tried; we put our passion into it”