Woman at War: This environmental comedy is an absolute joy

Review: Icelandic tale of a middle-aged eco-avenger is pleasingly surreal and silly 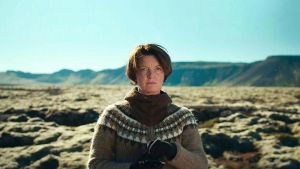 Halldóra Geirharðsdóttir in Woman at War

Woman at War opens with an act of sabotage, as the impressively jumpered 50-year-old heroine (Halldóra Geirharðsdóttir) uses a bow and arrow to take down a rural powerline. In her local village no one, save for select collaborators, suspects that Halla, a mild-mannered, t’ai-chi-ch’uan-practising choirmistress, is spearheading a one-woman campaign against Iceland’s expanding aluminium industry.

When Halla learns that she is in line to adopt Nika (Margaryta Hilska), a Ukrainian orphan, she has to choose between her dream of having a child and her determination to save the world.

Director of photography Bergsteinn Björgúlfsson must have felt spoiled for choices. The breathtaking vistas of Iceland play themselves in this extraordinary, eccentric second feature from Of Horses and Men director Benedikt Erlingsson.

Throughout, the heroine is accompanied by a three-piece band consisting of accordion, drums and tuba

Woman at War unfolds as a series of paradoxes and genre-bending unusual choices. It’s a comedy about the environment and adoption. It’s an action film, replete with a helicopter chase and infrared cameras, centred on a middle-aged woman. It’s fun and it’s fiercely anti-capitalist. It’s deadpan and silly and surreal. Further curveballs arrive in the form of a twin and, in what is arguably the film’s warmest sequence, a helpful sheep farmer who may or may not be Halla’s cousin.

Throughout, the heroine is accompanied by a three-piece band consisting of accordion, drums and tuba, and Ukrainian folk singers interact with Halla, who articulate her thoughts in music, even though she cannot see them.

The droll humour often recalls the work of (the sadly retired) Aki Kaurismäki. Woman at War is a huge showcase for Halldóra Geirharðsdóttir, who brings grit, determination, and quiet charisma to every scene. An engaging curiosity and an absolute joy.