Knock Down the House: Charting the rise of Alexandria Ocasio-Cortez

Review: She wasn’t supposed to be the star of this Netflix political documentary. But she so is 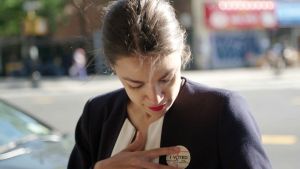 Alexandria Ocasio-Cortez in Knock Down the House. Photograph courtesy of Sundance Institute

Film Title: Knock Down the House

The realisation that, until very recently, almost nobody had heard of Alexandria Ocasio-Cortez arrives with a jolt. The current representative for New York’s 14th congressional district entered the race for the 2018 nomination as a rank outsider.

Joe Crowley, the sitting Democrat in a district more likely to elect a horse than a Republican, had the entire weight of the machine behind him. We know what happened. A combination of hard work, fastidious organisation and focused intelligence won AOC the nomination and the subsequent election. The millennial moment in US politics had arrived.

There is an inevitable imbalance in Rachel Lears’s documentary. Knock Down the House is a study of four female candidates who sought to shake the status quo in those midterms: Amy Vilela, Cori Bush, Paula Jean Swearengin and Ocasio-Cortez.

We can hardly blame the film-makers for the apparent inclination towards AOC. All get a chance to impress the viewers with their sincerity and purpose.

Swearengin, from the unambiguously named Coal City, West Virginia, stands up against the stereotypes that gather around her state. “No teeth, no shoes, no brains,” she sighs, more in sorrow than anger.

Knock Down the House trailer

Bush goes against a Democrat dynasty in St Louis.

Vilela, whose daughter died after being turned away from a hospital for lack of insurance, bustles with as much warmth as justified anger.

One wonders how the film might have looked if AOC hadn’t achieved celebrity status. It is her charisma and fame rather than any bias that nudges her to the front of the story.

We accept that the film is very much on these women’s sides (and why not?), but any dispassionate observer would surely be impressed by AOC’s extraordinary unflappability. When she learns that she’s won, she momentarily collapses into a flustered heap before, as if a switch has been flicked, snapping hurriedly back into businesslike campaigner. It’s like watching the anti-Veep in action.

The documentary is marginally compromised by the usual infelicities. We see AOC, employed as a waitress, getting the ice ready for a day’s service, but – even if the clip-on microphone pack evades notice – few will be persuaded that such sections count as full-on verité. No really hard questions are asked of any candidates.

Nobody will, thus, confuse Knock Down the House with warts-and-all docs such as Robert Drew’s Primary or Josh Kriegman and Elyse Steinberg’s Weiner. It’s a friendly record of an extraordinary moment. There is a place for such things.

Opens on May 1st