New this weekend: Woman at War, Vox Lux and Tolkien

The official trailer for Eighth Grade, written and directed by Bo Burnham. Video: A24 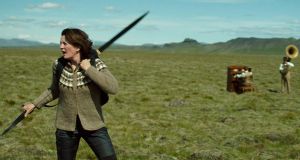 WOMAN AT WAR ★★★★☆
Directed by Benedikt Erlingsson. Starring Halldóra Geirharðsdóttir, Davíð Þór Jónsson, Magnús Trygvason Eliasen, Ómar Guðjónsson, Jóhann Sigurðarson, Margaryta Hilska
This Icelandic film opens with an act of sabotage, as the impressively jumpered 50-year-old heroine Halla (Geirharðsdóttir) uses a bow and arrow to take down a rural powerline. In her village no one suspects that the mild-mannered, t’ai chi practising choir mistress is spearheading a one-woman campaign against Iceland’s expanding aluminium industry. When Halla learns that she is in line to adopt a Ukrainian orphan (Hilska), she has to choose between her dream of having a child and her determination to save the world. As a comedy about the environment and an action film centred on a middle-aged woman, this curiosity is full of surprises. 12 cert, lim release, 101 min TB

A young woman (played first by Cassidy and then Portman) survives a school shooting to achieve accidental fame and become a world-conquering pop star. This is bravura film-making to a purpose. Nudging Natalie Portman towards a performance worthy of late Joan Crawford, Corbet delivers countless striking set pieces as the picture probes the politics of spectacle and the dynamics of contemporary fame. The orchestral score by the late Scott Walker is magnificent. The sense of menace is overpowering. A divisive triumph. 16 cert, lim release, 115 min DC

By Saruman, there’s a lot of motivation and inspiration in this study of JRR Tolkien (Hoult) as a young man. We begin in a hilly shire, from which John Ronald Reuel is soon dispatched to a terrifying version of Birmingham: dark piles illuminated by fiery mills. It’s Mordor. So is the first World War. There is too much of that trite foreshadowing, but, as events progress, the characters develop lives of their own. Ultimately rather moving, 12A cert, gen release, 111 min Full review DC

Enormously engaging study of a young girl (Fisher, brilliant) preparing for the jump into the US high school system. There isn’t an enormous amount of plot. Kayla finds herself at a birthday party for one of the cool girls and ends up slinking away in appalled shame. She makes friends with a nice older girl (yes, they do exist in this world) when visiting her new high school. And so on. There is much awkwardness here, but also a great deal of hope and warmth. Essential. 15A cert, gen release, 93 min Full review DC

China, 2001: Qiao (played by the director’s partner and longtime lead Zhao Tao) is a young woman who lives in a shabby coal-mining town where the pit faces closure. Her boyfriend Bin (Liao Fan) is a dashing young jianghu who runs a local seedy nightclub. When Bin’s supremacy is challenged by younger wannabe mobsters, Qiao fires the shots that disperse them and goes down for Bin’s unregistered gun, serving five years in his stead. Their relationship – a series of abandonment – mirrors seismic societal shifts. Zhangke’s longform drama maintains an intriguing relationship with social realism., as the film throws a weird, extraterrestrial curveball before returning to interpersonal pyrotechnics and rich allegory. Club, IFI, Dublin, 138 min Full review TB

Following a spell in jail for his involvement with the killing of a young woman, Ronan Callahan (Dunford) rides into town to encounter near-complete hostility. Sean McKenna (Cranitch), the victim’s brother, has taken to digging up the bog in search of the still-missing body. This being an Ulster western, the searchers stay in pretty much one place and pursue their hunt through a Sisyphean process that, involving piles of earth, would suit the characters in a Samuel Beckett play. Powerful, rough, odd. 15A cert, lim release, 97 min Full review DC