Tolkien: This biopic is better than any of the Hobbit movies

Review: It’s a bit mean of the Tolkien estate to disavow this harmless, touching film 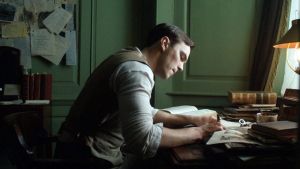 The first World War has, over the past 100 years, done a great deal of motivational work in fiction. Frail young men are forever staring blankly into space before falling for the era’s fashionable siren. You know the sort of thing.

By Saruman, there’s a lot of motivation and inspiration in Dome Karukoski’s study of JRR Tolkien as a young man. We begin in a hilly shire, from which the young John Ronald Reuel – halfway towards total orphanhood – is soon dispatched to a terrifying version of Birmingham: dark piles illuminated by fiery mills. It’s Mordor. So is the first World War.

He forms, with three chaps, a close friendship that you might almost call . . . Oh, I don’t know, a fellowship, perhaps. There is talk of dragons. What else would he take his girlfriend to on a first date but (wait for it, wait for it!) the Ring Cycle.

Though endlessly pretty and juiced up by one of Thomas Newman’s loveliest scores, the opening third tries the patience with its relentless insistence that a fictional work must be a compilation of its creator’s early experiences.

As the film progresses, however, Tolkien gradually finds a persuasive voice of its own. Nicholas Hoult uses his vulnerability to good purpose as a man who has trouble locating his vocation. Lily Collins makes something warm and nuanced of the young woman who was to become Mrs Tolkien.

The brief hallucinations of Middle Earth at the Somme are a mistake – indeed, in questionable taste

Co-written by David Gleeson, a talented Limerick man with many strings to his bow, the script eventually decides that something less trite than early trauma was the driving force behind The Lord of the Rings: the author’s passion for practical philology. It all comes together when a distinguished theatrical knight appears framed in an Oxonian window.

It is no accident that the Great War has remained such a narrative staple. Once again, the conflict scythes through relationships and reforms frail ambitions. The brief hallucinations of Middle Earth at the Somme are a mistake – indeed, in questionable taste – but the inevitable reckoning with mortality is properly moving.

We should mention that the Tolkien estate has grumpily disavowed the film. This seems a bit mean. It’s mostly harmless. It’s often very touching. It’s better than any of the Hobbit films.

Daisy Ridley: ‘The privilege I have? I don’t think so’