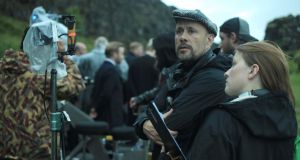 Benedikt Erlingsson is a late bloomer as film directors go.

Woman at War, Benedikt Erlingsson’s new feel-good, musical, comedy, Icelandic eco-thriller – it can be all those things and an adoption drama too – opens with a bow and arrow.

Halla (Halldóra Geirharðsdóttir), the film’s heroine, shoots for the sky, ultimately causing local power lines to pop and explode. She’s hoping her actions will deter Chinese investors from expanding the aluminium industry across the mountains of Iceland. Until those plans are abandoned, she’ll take aim at the infrastructure, one pylon at a time.

The camera pulls back to reveal the drummer, tuba player and accordionist who follow Halla around everywhere; all the better to articulate her inner thoughts and feelings.The musicians are later joined by Ukrainian singers.

You have to be there.

“I come from theatre and it’s very common in theatre to use music to communicate with the audience,” says Erlingsson. “I wanted the musicians to be a kind of Greek chorus. This is a fairytale. I didn’t want boring film music where the big strings tell you what to feel.”

No one is going to find the music or any other part of Woman at War boring. Geirharðsdóttir’s Halla lives an intriguing double life. By day, she’s a respectable, sunny 50-year-old choir mistress who has applied to adopt a Ukrainian orphan (hence the folk singers). When a letter arrives telling her she has been approved she has to make a decision: save a child or save the world.

“My idea was to make a fairytale but about this very complicated individual.” says Erlingsson. “One inspiration was wondering what Artemis, the Greek goddess, would do if she was sent to earth? I also thought about Astrid Lindgren’s Pippi Longstocking stories.”

Halla was also inspired by murdered environmentalists Berta Cáceres from Honduras and Yolanda Maturana from Columbia.

“I’ve often noticed that most environmental activists are women,” says the writer-director. "There’s something compelling about seeing women fighting for Mother Earth or taking a stand against capitalism.”

Erlingsson, who once chained himself to a whaling vessel as a young man in order to protest Iceland’s industrial whaling practises, is understandably dismayed by the common use of the term eco-terrorist. His heroine is an eco-warrior, he says: there’s no such thing as an eco-terrorist.

“Environmentalists are interested in long-term interests of everybody,” he says. “It’s very wrong to label somebody who is fighting for the larger interests of everyone as a terrorist. Any resistance is labelled as sabotage or treason or terrorism. As a young man protesting against the whaling industry, I learned how nationalist rhetoric and propaganda is used against dissent. Terrorists kill innocent people. That’s not the case here. She’s not harming people. She’s only sabotaging structures. For non-violent protest to work, it has to have an economic impact. That is how Gandhi succeeded: by using strikes and boycotts to sabotage industry.”

For her splendid work in Woman at War, Geirharðsdóttir was nominated for the European Film Award for Best Actress last December. Erlingsson has known Geirharðsdóttir since they were 10-years-old, acting together in a children’s play directed by his mother at Iceland’s National Theatre. They went to theatre school together, trained as clowns together and performed a two-person show together. Despite this long association, the filmmaker did not write Woman at War with Geirharðsdóttir in mind.

“I thought about her early on in the writing process,” he says. “But I thought about other actors too. In a way, she was an obvious choice. The only choice. She is herself a big figure in Iceland, an institution. She’s very vocal and outspoken about women’s rights and she’s a great actress. She can play men just as easily as she can play women. She played Don Quixote in Icelandic theatre. She is our Sarah Bernhardt.”

Erlingsson is a late bloomer as film directors go. He had already amassed dozens of screen and theatre acting credits, notably appearing in Lars von Trier’s comedy, The Boss of it All, before he transitioned to the other side of the camera with his first short film 10 years ago.

“My father was an actor and my mother was a director at the National Theatre of Iceland so I’m very unoriginal in one sense: I do exactly the same work as my parents”, he laughs. “I’m an old dog in the business. My mother cast me in my first role when I was one. I was made to cry for a radio play. By nine years old, I was working in children’s theatre every weekend.”

Filmmaking suits him. He won more than 20 international awards with his directorial debut Of Horses and Men, including the New Directors Prize in San Sebastian. Woman At War, premiered to huge acclaim at Critics’ Week at Cannes last year, where Erlingsson and co-writer Ólafur Egill Egilsson won the SACD award. The film has subsequently picked up the $53,000 (€47,170) Nordic Council Film Prize, the Lux Prize, and was selected to represent Iceland in the foreign-language Oscar race.

“I’ve had a long education,” he says. “I’ve been making a lot of films for a long time. It is just that I haven’t directed them until now. It was a subconscious wish for a long time. One day I was watching François Truffaut’s The 400 Blows and I remember thinking: there no way around it, I want to do this.”

Woman at War is released May 3rd.

Rams (Directed by Grimur Hakonarson, 2015)
Two sheep farming brothers haven’t spoken to each other for 40 years until an outbreak of scrapie threatens their rare flocks in this unexpectedly thrilling farming drama.

Under the Tree (Hafsteinn Gunnar Sigurðsson, 2017)
Older neighbour loathes younger second wife next door in a black comedy that raises – or possibly lowers the bar – for the nastiest, meanest, pettiest acts committed by seemingly ordinary folk.

Jar City (Baltasar Kormákur, 2006)
A jaded cop links a murder to a decades old rape case and neurofibromatosis, a Nordic affliction in this compelling police procedural. Features the most revolting food scene in the history of cinema.

Metalhead (D. Ragnar Bragason, 2013)
When 12-year-old Hera loses her brother in a tragic farming accident, she adopts his love of guitar and heavy metal music in his stead. A liberal priest, who also loves heavy metal, tries to bring the real Hera back.