Olivia Cooke: ‘Colm Meaney does everything with a wink and it’s so delicious’

The Manchester actor on making the leap to Hollywood, and starring in new Irish-set film Pixie 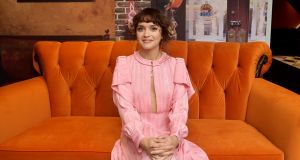 Olivia Cooke: ‘You get a job to do and you can’t be put off by the fact that Steven Spielberg is on set with you every single day. Or that you’re acting with Mark Rylance. You can’t focus on that.’ Photograph: Stefanie Keenan/Getty Images

Lockdown has been a strange time for everyone, including Olivia Cooke. At 26, the star of ITV’s Vanity Fair and Steven Spielberg’s Ready Player One hasn’t had a fallow month in some eight years. Not working has been quite an adjustment.

“I haven’t worked in a year,” says the British actor. “I’m going a bit mad. I have a weird PTSD reaction to the sound Netflix makes when it turns on. During lockdown I got so lonely I went on Instagram for the first time. I like seeing what Bernie is saying but I’m done with it now. There’s something about my algorithm. It keeps showing me toenails with fungus and teeth-whitening treatments. Why do you keep showing this to me?”

Even if she isn’t travelling and shooting, Cooke has plenty of projects to promote. Last year she played a pregnant homeless woman giving her baby up for adoption in John Carney’s romantic comedy series Modern Love. Sound of Metal, a drama starring Riz Ahmed as a drummer losing his hearing and Cooke as his singing girlfriend, will premiere on Amazon Prime this December.

Before that there’s Pixie, a kinetic, post-Tarantino crime caper from Barnaby Thompson, the producer of Wayne’s World and director of the St Trinian’s movies.

I felt this a lot during lockdown, that in Britain and Ireland we’re really lucky to have such gorgeous landscapes

“It was so much fun,” says Cooke. “It was a bit debauched, actually. This is my first straight-up comedy that I’ve done. I had heard that those are the most stressful kinds of films to make because you’re constantly worried about whether it’s funny. But luckily the mad tone of the film carried off and on the screen.”

She was impressed by co-star Meaney, who, she says, “does everything with a wink and it’s so delicious”, and was even more impressed by her surroundings. Made with support from Northern Ireland Screen, Pixie was shot around Belfast with additional photography in the west of Ireland.

“We went on a bit of a road trip around Sligo,” says Cooke. “I felt this a lot during lockdown, that in Britain and Ireland we’re really lucky to have such gorgeous landscapes. The Republic of Ireland is so stunning. It’s so lush you feel like you’re in New Zealand sometimes.”

For all the fun and games (and scenery), Cooke did find Pixie’s Irish accent a bit daunting.

“I don’t think it’s perfect,” she says. “I have so many Irish mates, including my friend Niall who is a bit of a stickler. When he saw the trailer, I said, what do you think? What about my accent? He said it sounds fine. I can deal with fine. But it was so nerve-wracking. I was surrounded by Irish actors. And it infuriates me when I hear a bad accent. I can only imagine what it sounds like when you get a non-Irish actor being Irish and getting it wrong. So I took it very seriously. And Niall McNamee was okay with it. So that was something.”

Cooke has serious form with accents. Though Oldham-born and raised, most of her best known roles – as an Arizona waitress turned prostitute in Kate Says Goodbye, as the girl-next-door in Psycho prequel Bates Motel, as an MIT student in twisty sci-fi The Signal – are quintessentially American. She claims her American accent for her Bates Motel audition was “terrible”, but she seems to have improved.

“I’ve gotten better at it,” she says. “It was very bad. I did it well enough to get the part from the audition tapes. But I knew. As soon as I got on set I started working with the dialect coach. I found it hard to get my head around it. But with constant practice, after five months, I could manage. And then every job I did after that for a while was American. So it just became like second nature.”

Cooke was born in Greater Manchester to retired police officer John and sales representative Lindsy. She attended Royton and Crompton Academy and would have sat an A-level exam in drama if she hadn’t landed a role alongside Christopher Eccleston, Dervla Kirwan, Andrew Scott and Ewen Bremner in Blackout (2012), a three-part BBC drama.

“I was just lucky that my hometown had a school theatre workshop,” says Cooke. “I started going at a young age and I met all my best mates there. It was a safe space for us all to be silly.”

She was surprised, however, when her career brought her to the US when she was still in her teens.

“When I would say I wanted to act, people would say good luck in Coronation Street,” she recalls, in her unaffected Manchester accent. “They’d hear my accent, they’d think you were destined for a soap. And I’d say: well, actually, I don’t want to do a soap. And they’d say oh, you’re too good for a soap?

“When I was younger I was always a bit of a purist when it came to my career. Even though I had no right to be. I turned down auditions for blockbusters because basically I would just have been there to be the good-looking sidekick. I thought those roles were ridiculous. It would have been very difficult to establish myself as a serious actress. ”

Though she recalls having to call home for mum to come to the rescue with a credit card after landing a part in a Vancouver production, sticking to her guns has worked out rather well for Cooke. Ouija (2013), her Hollywood debut, produced by Michael Bay and Jason Blum, grossed more than $100 million. In 2015, she was one of three title leads in the much-admired Me and Earl and the Dying Girl, which was snapped up by Fox Searchlight for a record $12 million at the Sundance Film Festival.

“It was the best script I’ve ever read,” she says. “I thought: oh f***, I’ve got to do some proper acting now; I’m going to get found out. Obviously it was heightened and a lot of it was comedic, but it felt like all I had to do was say the words and that did the performance for me. It was such a gift. And to meet people that are so creative like Alfonso Gomez-Rejon, the director. And to work with Thomas Mann and RJ Cyler was such a treat. I had to remind myself at the time: it’s not always going to be like this.”

Me and Earl and the Dying Girl brought Cooke to the attention of many awards bodies and to Steven Spielberg, who cast her as the female lead in Ready Player One.

I don’t get starstruck. I just get embarrassed that I’m going to say the wrong thing

“I don’t think I realised how amazing it was until after it was over,” she says. “You get a job to do and you can’t be put off by the fact that Steven Spielberg is on set with you every single day. Or that you’re acting with Mark Rylance. You can’t focus on that. You feel you have to go above and beyond everyone’s expectations. But looking back, I don’t think I allowed myself to enjoy it as much as I should have. I was too concerned with the job, annoyingly.”

Having never expected to have a Hollywood career, Cooke has, to date, appeared alongside Oscar Isaac, Olivia Wilde, Annette Bening, Antonio Banderas, Bill Nighy, Maisie Williams and even Harry Styles, who gives her a piggyback ride in One Direction’s 2012 tour video, Autumn Term.

“My feet remain planted on the ground otherwise. Imagine coming back to Oldham with a lot of airy-fairy ideas? Makes me cringe just thinking about it.”

Pixie is in cinemas from October 23rd