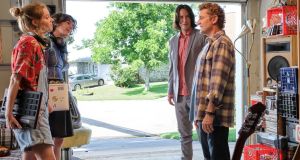 Just when you think you’re all Sherlocked out, along comes Enola Holmes to steal some of her older brother’s thunder. Based on Nancy Springer’s series of novels, this all-ages crowd pleaser casts a thrillingly charismatic Millie Bobby Brown as the young proto-feminist sibling of Arthur Conan Doyle’s famous creation. Cavill is a dishy Sherlock and Bonham Carter her suffragette mum. Working from a lively script by Jack Thorne, director Bradbeer keeps up a rollicking pace. More please! TB

The excellent Beharie plays Turquoise Jones, a youngish single mother raising a smart teenager called Kai Chikaeze) in an African-American suburb of Fort Worth, Texas. Fifteen years earlier, Turquoise won the Mis Juneteenth pageant, but she was unable to make good on her potential. Now she wants Kai to make up for her missteps. Bolstered by strong performances, the film creates a vivid portrayal of a community on the edge, but it fails to engage with the tricky business of pageant politics. DC

On hearing “I admire the ambition”, the reader may be forgiven for scouting out an exit. But we really should celebrate Almereyda’s efforts to avoid biopic tropes in his examination of scientist Nikola Tesla’s life and work. Interesting self-conscious games surround Hawke’s intense central performance. Hewson both plays a role in the drama and comments from the present. Some sets are pointedly theatrical. None of this can, however, entirely compensate for the wooden dialogue in the main body. DC