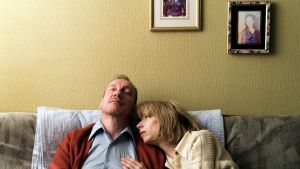 David Thewlis and Sally Hawkins in Eternal Beauty. A romantic dalliance with Thewlis, battling his own demons, looks doomed from the start. Photograph: Bulldog Film

Imagine Roman Polanski’s nightmarish Repulsion played for laughs. No? Well, happily, writer-director Craig Roberts has done the heavy lifting for you. The actor turned film-maker reunites with his former Submarine co-star Sally Hawkins for this darkly comic, nuanced portrait of paranoid schizophrenia. “I think you want to kill me,” Hawkins’s Jane tells an uninterested photographer. “Schizophrenia means I want to kill you.”

Jane is on the margins of a family that prompts one to rejig the opening to Tolstoy’s Anna Karenina: “Happy families are all alike; every mean family is mean in its own way.” Jane’s mostly sympathetic sister Alice (Alice Lowe) often snaps in exasperation, given Jane’s constant dire warnings that Alice’s husband is cheating on her. Their mother (Penelope Wilton) is witchy, snappy, and only slightly more callous than Jane’s nasty sister Nicola (Billie Piper).

Jane herself, although more empathetic than the others, is no picnic. A scene in which she buys expensive Christmas presents for herself from her siblings and demands the cost back is darkly funny. Other scenes, in which she pauses her medication and displays ill-intent toward her nephew, are less amusing.

The family is framed as quirky and awful, as if sketched out by Michel Gondry or Wes Anderson on a very dark Welsh day. (South Wales plays Anywhere, UK in the film.)

Jane’s paranoia is more carefully constructed. Classic movie symptoms – seeing spiders and hearing people in the wall – are offset by foggy, nowhere conversations and painful flashbacks to a jilted wedding day and a painful beauty contest. A romantic dalliance with a musician (David Thewlis) battling his own demons looks doomed from the start.

Hawkins and Morfydd Clark (excellent as the younger Jane) are joined by a terrific ensemble to ensure that the heroine’s misfortune is enlivened by sly digs and occasionally, raucous joy.