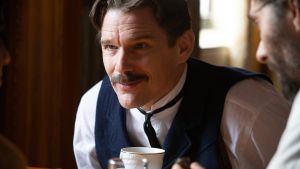 When a critic uses some variation of “I admire the ambition”, the careful reader may be forgiven for scouting out an exit. But we really should celebrate Michael Almereyda’s efforts to steer away from standard biopic tropes in his examination of Nikola Tesla’s life and work. It is not an entirely smooth ride. Some of the manoeuvres get caught up in their own coattails. The effort is, nonetheless, worth admiring.

Tesla has enjoyed something of a popular renaissance in recent decades. For the guts of a century, he was the “underappreciated” Serbian-American genius who realised the efficacy of alternating current for electricity supply. He may have had an SI unit in his name (for magnetic flux density, since you ask), but he never secured the fame of his rival Thomas Edison. Until now. David Bowie played him in Christopher Nolan’s The Prestige. Nicholas Hoult took the role in The Current War. Plans are afoot to establish Tesla Day on his birthday.

Almereyda’s film has as much to do with the business shenanigans surrounding Tesla’s American years as it has to do with the science. Given hooded, evasive intensity by Ethan Hawke, the great man squabbles with Edison (Kyle MacLachlan), who initially favours direct current, and veers towards the millionaire JP Morgan. He struggles to get by, but continues to think enormous thoughts.

Early on, Almereyda’s own script clarifies that we are not in the territory of Sunday evening telly. Eve Hewson, who plays Morgan’s daughter in the main body, appears with a laptop to offer explanatory narration and to cheekily undermine the action on screen.

None of this entirely compensates for the leadenness of the dialogue. Large parts of Tesla find the protagonist – never permitted much spark by director or star – carrying on conversations in darkened rooms.

Hewson’s inclinations towards The Big Short school of storytelling come as welcome relief as do the stylistic innovations. Indeed, one is left wishing the film were even weirder, even cheekier, even more experimental. The self-consciousness sits awkwardly with the central strain of sobriety.

A fascinating project for all that. Tesla continues his belated rise. He’ll be on a banknote next.