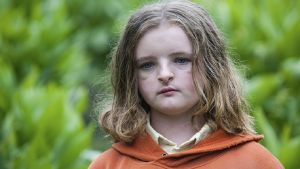 How freaky is Hereditary, the “scariest film since The Exorcist?” Imagine if Rosemary’s Baby had a baby with baby Gage from Pet Sematary and it climbed to the top of Jacob’s Ladder and fell down with a grotesque splat.

Prepare yourself for a discombobulating study of grief that goes beyond the conventional seven stages to take in another hundred-thousand or so, ranging between psychiatric meltdown, demonic possession, sporadic pyromania and roaring-crying.

Seriously, if Toni Collette doesn’t get an Oscar nomination for her standout performance then horror fans should – in the spirit of the medium – advance on the Academy with torches ablaze and pitchforks at the ready.

Haters will tell you that Hereditary, the fantastically adept feature debut from Ari Aster, is “not really a horror film”. As with Get Out and the criminally-underrated It Comes at Night, this is woke or art-horror.

In its early stages, it has more in common with an Ingmar Bergman joint than it does with anything by George Romero. So much angst. Just about the only moment of levity comes thanks to a cheekily incongruous choice of music for the end credits.

This is a horror because it’s genuinely horrifying.

It’s a film characterised by actual carnage and, pleasingly for genre fans, it’s rooted firmly in several very fine horror traditions. We won’t spoil things by naming them all – for once, literally anything constitutes a major plot spoiler in this twisty, surprising enterprise – but it begins in Don’t Look Now territory before going somewhere crazier still.

The story is wrapped up with a middle-aged woman’s inability to process the recent death of her plainly witchy mother. (Her funeral address is embarrassingly short on tributes.)

Annie Graham (Toni Collette), an artist who fashions tiny interiors in the style of dolls houses, as inspired by her own dysfunctional family, lives in a gloomy rural pile with her tolerant doctor husband (Gabriel Byrne) and two, differently troubled children.

Peter (Alex Wolff), her older, teenage son, is sinking into conventional high-school distractions: too much weed; a slightly creepy fixation on a female classmate. We have barely absorbed the scenario before Aster dramatically raises the emotional stakes.

There are probably only two conventional jump scares in the entire picture, but the filmmakers stoke unease by positioning warnings, omens and puzzles in every corner of the frame.

Shapes zip by in the peripherals. A flitting glare could be an apparition or a trick of the fading light. The avant-garde saxophonist Colin Stetson provides an ingenious, sneaking score – here it throbs; there it squeals – that does as much to point up potential menace as does Pawel Pogorzelski’s probing camera, with shots that echo the voyeurism required by Annie’s miniature recreations of her own life.

Long before the plot takes an explicit dive into the supernatural an atmosphere of non-specific dread has been established.

Returning to our Bergman argument, none of this is quite so unsettling as the naked, nerve-wracking extremes of Annie’s emotional journey. Collette has a lot of heavy lifting to do here and, in less capable hands, the heightened despair might have drifted into hysterics. But there is no sense that she is approaching the material with anything less than the upmost sincerity and authority.

The surrounding cast is equally strong. Stuck with the least showy role, Byrne confirms his ability – see also his fine turn in the recent Louder than Bombs – to convey integrity in the eye of the hurricane.

Wolff fights convincingly with a nest of warring hormones. Like the excellent, Millicent Simmonds in A Quiet Place, Milly Shapiro makes a sympathetic oddball of the youngest, most vulnerable character.

Ann Dowd, who should have won everything on the planet for her role in Compliance (2012), can’t be overlooked again, surely?

Enthusiasts will argue forever about the creative ambiguities scattered throughout the film’s barnstorming ending. They will have almost as much fun teasing out the influences that have worked upon Aster.

But the young American writer-director has made a film that goes to a few places that no horror has previously ventured. And he does so elegantly.

Occult themes are delicately woven alongside the possibility of mental illness. The decision to shift protagonist in the later stage is as brave as it is persuasive.

At times it feels as much like a hostage situation as a mainstream horror film. You half-long to walk out of the cinema just to escape the dread. But – too late – Stockholm Syndrome has set in. Make no sudden moves.

Rise of the killer robots: The future of war
7