A Wrinkle in Time: Oprah towers over this sprawling, messy film 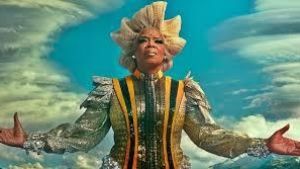 Mrs Which, a gigantic Oprah Winfrey, is given to speaking in Oprahisms

Film Title: A Wrinkle in Time

Four years on and the mathematically-gifted, pre-adolescent Meg is anxious, mopey, uncomfortable in her own skin, and an easy target for the mean girls at school. Her younger brother is precocious, big-hearted, and, as one carefully composed shot reveals, has something of James Baldwin about him.

One night, a strangely-attired woman named Mrs. Whatsit (Reese Witherspoon) arrives to inform the family that “there is such a thing as a tesseract.” Mr Murry, who had been working on means of travel in which time and space can be folded like an accordion, has “tessered” and is lost somewhere in the universe.

Whatsit is soon joined by Mrs Which, a gigantic Oprah Winfrey, given to speaking in Oprahisms (“The only thing faster than light is the darkness,” she counsels) and Mrs. Who (Mindy Kaling). The latter speaks almost exclusively in quotations from such wise folks as Shakespeare and Outkast (“How will you make it if you never even try?”).

The various Mrs. allow for Meg, Charles Wallace and Meg’s commendably woke school chum, Calvin (Levi Miller), to “tesser” their way around the universe in search of their missing father. But can they save both him and themselves from the encroaching darkness of The It?

First published in 1962, it has taken more than five decades and the interest of hot potato Ava DuVernay, to bring Madeleine L’Engle’s 17-million-unit selling YA classic to the big screen.

Watching this odd mish-mash of liberal Christian philosophy, quantum physics, and trippy adventure, it’s not hard to understand the delay. One scene, depicting Mrs Who surrounded by silks and stacks of books, is emblematic of the film’s overall clutter. There are, accordingly, pacing issues and tableaux that seem designed to scare the bejaysus out of Marie Kondo.

Nelson Mandela, Oskar Schindler, Indira Gandhi, Maya Angelou, and Bono are namechecked. There are self-improving quotations from the Lebanese poet Kahlil Gibran (“Life without love is like a tree without blossom or fruit”) and Persian poet Rumi (“The wound is the place where the light enters you.”)

This last line takes on greater significance when, during the final showdown between good and evil, Meg must consider the “gift of her flaws”. Yep. It’s that kind of movie.

Often, this glittery film looks like someone rammed a branch of Claire’s with a JCB. There are pretty flowers and pretty dresses. There are dozens of hugs, framed tightly and beautifully by DOP Tobias A. Schliessler (Dreamgirls, Beauty and the Beast), as if the camera is hugging the hug.

A Wrinkle in Time’s sprawling, messy, colouring-outside-the-lines is matched by an alarming sincerity.  No wonder Oprah literally towers over the picture and the excellent young cast.

An empowering motion picture for 10-year-old girls, this is the movieverse’s answer to broccoli: a film for smart, earnest little girls like Lisa Simpson to enjoy between recycling projects and writing letters imploring multinationals to do better.

It won’t charm everyone, least of all the diversity-bashers and anti-SJW trolls. And it won’t, as per the Republican Senator’s recent speech, be voting for Ted Cruz. It certainly won’t be the highlight of DuVernay’s career.

But, in common with its plucky heroine, A Wrinkle in Time looks certain to find its own place in the universe, making good chums along the way.