After Ocean’s 8, give Reservoir Dogs an all-female makeover

Donald Clarke: And then The Shawshank Redemption, The Sting and 12 Angry Women 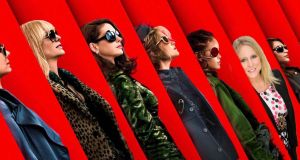 Let’s remake every film with an all-female cast. No, hear me out. There are obviously some downsides to this plan. For starters, we have enough remakes already.

But this would be worth doing to annoy those fatheads on the internet who think it is already happening. They had hysterics when the “classic” (actually so-so) Ghostbusters got the distaff treatment in 2016. They are already beginning to grumble about the imminent Ocean’s 8.

Cate Blanchett, Rihanna, Anne Hathaway and Sandra Bullock are among those gracing a heist thriller that, despite its admirable feminist tilt, still finds a role for James Corden.

Blanchett is Debbie Ocean. The target is the Met Ball. “It will be Jane Bond next,” some idiot is saying for the millionth time. “Why can’t the Social Justice Warriors leave classics alone? Boycott!”

To be momentarily serious about this, the gender imbalance in mainstream Hollywood is not going to be corrected by dragging up old stories and replacing the men with women. Ingenious writers need to create fresh new stories for worthwhile female characters.

Ocean’s 8 looks promising. But Hollywood needs to find new routes to fresh territories. Remember that gag at the end of Annie Hall? The industry is like a shark. If it stops swimming it will die.

Still, it is fun to speculate on those pictures that could get the all-female remake and remodel. Some require ludicrous reordering of social norms. So what? The film industry has been doing that for 100 years.

Let’s not tarry too much with a female James Bond. That has, essentially, been tried a few times already. Bond is such a thin creation that, if you change something so significant as his gender, then he (or she) ceases to be the same character. He becomes Evelyn Salt in Salt (thanks Angelina Jolie). He becomes Lorraine Broughton in Atomic Blonde (nice one, Charlize Theron). You may as well make him a miniature Scientologist as they did in Mission: Impossible (wotcher, Tom).

We would have more fun playing with a male team such as The Magnificent Seven. Women weren’t gunfighters? Erm, nobody was this sort of gunfighter in the old West. Both the 1960 film and the recent remake – inspired by Akira Kurosawa’s Seven Samurai – were as fantastic as any science fiction film. So do what you will.

Obviously, after Mad Max Fury Road, we want to cast Charlize in every action film. Hilary Swank has, however, proved herself possessed of the swagger and could confidently knock together a party including the likes of Ellen Page, June Squibb and Felicity Jones. They all trade in different kinds of zeal.

Endless heist movies could get the same treatment as that put the way of the Oceans sequence. How interesting it would be to swap the toxic masculinity of Reservoir Dogs for another, less penisy form of aggression. The notion of Ms Pink replacing Mr Pink is reason enough to give the project a go. Then again, if you were planning a film concerning competing female gangsters is this really the place you’d start?

There are more interesting possibilities in a female version of Lord of the Flies. Anybody who believes that young girls wouldn’t become competitively antagonistic if abandoned on an island hasn’t met all that many teenage girls. The plots of Mean Girls, Carrie and Heathers also argue differently. Too late. We were told last year that an all-female version of William Golding’s book really is coming our way. We’ll see. The internet mill says a lot of things.

If we must attempt a female version of a heavily male film then the prison movie offers fecund opportunities. How would the friendship between two inmates of a women’s prison differ to that between Tim Robbins and Morgan Freeman in The Shawshank Redemption.

I’d like to see Jennifer Jason Leigh and Viola Davis show us the answer. I guess Rita Hayworth could still play herself, but it would be fun to have a gender swap there too. Clark Gable? Kirk Douglas? Maybe, Andrea would have a poster of Victor Mature on her wall.

An all-women version of One Flew Over the Cuckoo’s Nest – set in another institution that has a female equivalent – offers even more enticing possibilities. As the rebellious McMurphy, you need somebody who can be both an appalling irritant and a awkward charmer. Octavia Spencer is right there. What fierce fun Melissa Leo would have with that role. Her cackle alone sells the project.

Buddy-buddy movies also tickle the possibility glands. The Odd Couple needs a lot of retooling to make its sexually politics acceptable for 21st century audiences, but there are larks to be had with a messy woman and her prissy friend. Melissa McCarthy and Emily Blunt need to get on board.

The most delicious option of all has already been attempted on stage once or twice. That makes the notion of 12 Angry Women no less interesting. There have never been so many interesting female character actors about the place. Frances McDormand would swallow the Henry Fonda part whole: a stubborn person who doesn’t mind inconvenience in the pursuit of truth. So many names could flesh out that jury: Jacki Weaver, Janet McTeer, Laurie Metcalf, Sally Hawkins, Vera Farmiga. Now, there’s a dead horse worth flogging one last time.

All that fun noted, we really are better off thinking up new stories with strong female characters. Don’t remake 12 Angry Men with women. Make a film as good as, but entirely different to 12 Angry Men that happens to star at least 12 women.

Annoying Men’s Rights idiots is a noble, noble cause, but it’s not quite an all-encompassing reason to stay alive. Which is not to suggest Steven Spielberg shouldn’t make that threatened Indiana Joan film (he really said that).