Jane Fonda: From Oscar-winning actor to 50 shades of ****

Fonda may be the greatest actor of her age. What’s she doing in the awful ‘Book Club’? 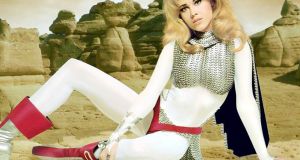 Put Jane Fonda on a stamp. It is allowed. Seven years ago, the US Postal Service announced that it would henceforth allow living people to be so honoured. In 2005, Jane celebrated the appearance of her father, Henry Fonda, on a 37-cent edition, but the Greatest Living American Actress (maybe) has yet to get herself on the non-sticky side.

Fonda has been several different kinds of brilliant actress through the decades: ponder Barbarella, They Shoot Horses, Don’t They? Coming Home, 9 to 5, and Grace and Frankie.

She has done something more remarkable still. She has been the spirit of several ages. The toned workout fanatic did as much to represent the 1980s as the angry peace campaigner did to encapsulate the late 1960s. Fonda is always here and she’s never superfluous.

There is sadly not much to be said in favour of her latest film. Book Club, in which a bunch of old pals get energised while reading 50 Shades of Grey, is another depressing entry to the patronising Grey Pound genre. This is not to begrudge Fonda, Diane Keaton, Candice Bergen and Mary Steenbergen the loot they got for sleepwalking through dross. If anyone deserves it they do.

An ungallant glance at the performers’ CVs confirms that, now 80, Fonda is at least eight years older than any of those co-stars. She is from the same generation, but sufficiently far to the other end of that bracket to have served as a mentor and example.

She began to achieve proper stardom in the 1960s, but, as the daughter of an acting dynasty, she has been famous since birth. The post-war generations aged with Fonda. She was braver than most. She got into more scrapes than many. She knew when to apologise and when to remain firm in her beliefs.

Born in 1937 to Henry and socialite Frances Ford Brokaw, Fonda suffered an early trauma when, in 1950, her mother died by suicide at a psychiatric hospital in New York. Jane went to Vassar for a while and then studied art in Paris.

It was Lee Strasberg, Gandalf to the Method brigade, who directed Jane towards her father’s profession. That acting teacher confirmed that the compliments she had received were genuine and not just attempts to curry favour with a Fonda.

Jane worked in the theatre. She hit pay-dirt with her turn as an accidental cow-girl in Cat Ballou. Two years later, in 1967, for her first husband director Roger Vadim, she played a class of inter-galactic sex kitten in the then groundbreaking, now scarcely endurable Barbarella.

If Fonda has a limitation as an actor it is one that some others may envy. She is not good at being anything other than intelligent. Her undeniable smarts brought some dignity to Barbarella and fleshed out a doomed character in Sydney Pollack’s They Shoot Horses, Don’t They?

Nobody could mistake Bree Daniels, the sex worker she played in Alan J Pakula’s Klute, as anybody’s fool. She won an Academy Award for that role in 1972 and took a second six years later for the Vietnam drama Coming Home.

By this stage she had established a reputation for a studied intensity that worked comfortably with a gift for flinty comedy. She was very funny opposite George Segal in Fun With Dick and Jane. Her workplace comedy 9 to 5, released in 1980, pointed towards all kinds of looming social alterations.

Meanwhile Fonda had, if you believed certain right-wing publications, become the most hated woman in America. A pal of the French intellectuals who stirred discontent in the early 1960s – she later appeared in Jean-Luc Godard’s Tout Va Bien – she was a confirmed political radical before she reached 30. She stood by the Black Panthers. She remains an interested feminist.

None of this was easy. Fonda wasn’t merely sitting at a keyboard, firing off tirades at this week’s hashtag. She was taking unpopular stances in public and, demeaned as a woman and further patronised as the daughter of a legend, suffered first-hand, spittle-flecked abuse from a generation that believed the 1960s generation were fostering actual revolution.

For all that, she might have escaped full demonisation if she hadn’t climbed on that anti-aircraft gun in Hanoi. Visiting the North Vietnamese city in 1972, while the war still raged, she was persuaded to sit on the weapon for a few moments while listening to soldiers sing. Smiling and wearing a helmet, she looked as if she was gleefully waiting to shoot down American airmen.

Fonda has been unequivocal in her apologies. While explaining the circumstances, she has not sought to deflect blame. “The buck stops here. If I was used, I allowed it to happen,” she wrote 30 years later. “But the photo exists, delivering its message regardless of what I was doing or feeling. I carry this heavy in my heart.”

It is to her credit that she was never tempted to hide away. She shouldered the blame and continued to fight for the things she believed in. There’s a great deal of steel within that frame.

Karina Longworth, creator of the popular podcast You Must Remember This, dedicated a recent series to Fonda and her contemporary Jean Seberg. The two lives ran parallel for many years. Both were involved with French intellectuals. Both had emotional traumas (Fonda went through a period of extreme bulimia as a younger woman).

Yet Seberg died tragically in 1979 from a barbiturate overdose. A few years later, Fonda’s fitness video became the biggest selling VHS of its era and, though still “Hanoi Jane” to some, she was restored to the mainstream.

Life kicks people in different directions. The misused Seberg is as much a heroine as the resurgent Fonda. But, however it happened, Fonda developed into a durable, awkward, charming national institution. 9 to 5, released in the second year of the Reagan administration, anticipated the coming obsession with business and alerted us to new challenges for feminism.

A long marriage to political radical turned mainstream Democrat Tom Hayden (spirit of the 1960s) gave way to a surprising hook-up with CNN’s founder Ted Turner (a very 1990s figure). She went into half-retirement from movies and then, in 2005, re-emerged in the awful Monster in Law opposite Jennifer Lopez.

Fonda proved she can still deliver when offered the right part. She was the best thing in Paolo Sorrentino’s fitful Youth. She recently reunited with Robert Redford – their fourth time as co-stars – for Netflix’s very decent Our Souls at Night.

Then there’s Book Club. We can say something else in that film’s favour. It is sobering to note that, when Henry Fonda starred opposite his daughter in On Golden Pond, he was a full four years younger than she is now. Yet that was very much a film about endings. The last sunset. The last glance at a beloved landscape. All that stuff.

Actors of his generation were expected to do little else than die movingly. Nobody is yet expecting that of Jane Fonda or of the characters she plays.

Put her on a bleeding stamp.