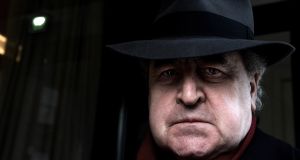 “I can’t see what the fuss is about”: John Banville. Photograph: Cyril Byrne/The Irish Times

The Irish novelist John Banville has defended Liam Neeson following criticism of the actor for comments relating to the rape of a friend 40 years ago.

“I can’t see what the fuss is about frankly,” the Man Booker-winning author told The Irish Times.

Speaking to the London Independent, Neeson explained that, following his friend’s rape, he took a cosh and walked out hoping that any random “black b**tard” would engage with him so that he could “kill him” in revenge. The Independent subsequently published audio of the interview online.

The comments have generated front-page news stories throughout the world. Neeson is due to star as Philip Marlowe in an upcoming film of Banville’s The Black-Eyed Blonde, a variation on Raymond Chandler written under the pseudonym Benjamin Black.

“I listened to the recording of the interview he gave to the journalist, who shouldn’t of course have made her tape public. I thought that was a bit of a betrayal,” Banville said. “I cannot see what the fuss was about. It seems to me people are not reading what the man said: ‘I had this urge. I shouldn’t have done it. I am ashamed of it. I shouldn’t even be saying this to a journalist.’ He was indiscreet to say the least.”

Neeson expressed regret in the original interview and reiterated his shame during a subsequent appearance on ABC’s Good Morning America. “I’m not a racist,” he told host Robin Roberts. There has, nonetheless, been criticism of his racially charged language and his decision to air the story unprompted in a brief promotional interview for an upcoming film.

Banville’s comments come after the red carpet event for the premiere of Neeson’s film Cold Pursuit was cancelled. The film is due to open in the US on Friday and later in the Ireland and the UK.

“We all have primitive urges,” said Banville, a former literary editor of The Irish Times who won the Booker Prize in 2005 for his novel The Sea.

“He was foolish. He should have known better. He is a public man. He shouldn’t be using language like that. But he said he was ashamed. Nobody seems to have picked up on that. He was ashamed to have the urge to kill somebody at random. Frankly, I have often had the urge to kill somebody at random. We all have. I have no doubts we all have. This new puritanism that is stalking the world I find very frightening.”

The development of The Black-Eyed Blonde is still at an early stage. William Monahan, an Oscar winner for The Departed, is listed as writer. Alan Maloney, whose credits include The Siege of Jadotville and Intermission, will be producing for Parallel Films. Following the controversy, speculation about Neeson’s future in the business has raged. Banville, remains optimistic.

“We don’t know anything. I am not the writer of the script. I only wrote the book,” he said.

But he expects the production to proceed?

“Oh yes. I hope so. I would love to do a film with Liam Neeson.”