The Lego Movie 2: Everything is a little less awesome than last time

Review: Five years after the first film, the Lego heroes are under threat from Duplo aliens

The official trailer for The LEGO Movie 2: The Second Part, starring the voice talents of Chris Pratt, Elizabeth Banks and Will Arnett. Video: Warner Bros. 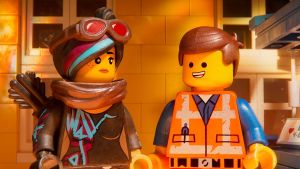 “Everything is not awesome,” sing the Lego Movie collective at a late, crucial juncture in this serviceable sequel. Other lyrics speak to downplaying expectations. It’s these words – and not the new earworm This Song Will Get Stuck in Your Head that are the central theme of the Lego Movie 2.

Set five years after the genuinely awesome 2014 original, the fourth Lego movie sees the jolly borough of Bricksburg transformed into the post-apocalyptic ward Apocalypseburg and under siege from alien Duplo invaders. It falls to everyman master builder Emmet (Chris Pratt), his far more capable chum Lucy (Elizabeth Banks) and a collective that includes Batman (Will Arnett) to take on the marauders.

There are some decent one-liners here. “But I don’t like to talk about my backstory,” says Rex, Emmet’s new raptor-taming, archeologist, bro-chum, in the middle of spilling his backstory. “I totally won’t have you killed immediately”, sings Tiffany Haddish’s suspicious, shape-shifting Duplo queen.

The screenplay by Phil Lord and Christopher Miller – who handed directing duties to Trolls’ Mike Mitchell to focus on the Spiderverse – interacts successfully and movingly with its live action backdrop and has a more ambitious narrative arc. It makes room for better female characters, including Stephanie Beatriz’ General Sweet Mayhem, and acknowledges that Lucy aka Wyldstyle, did a lot of the heavy lifting on behalf of the first movie’s Chosen One.

As ever, the DC Extended Universe is fondly lampooned, as Batman opts for a white fur disco cape, the Justice League proves rather useless, and Aquaman takes off early for a standalone movie.

For all these irreverent qualities, the Lego Movie 2 lacks the snap and crackle of its predecessor and of the Lego Batman Movie. The expansive storyline, in practice, leaves room for longueurs. And everything else is, well, grand like, but only occasionally awesome.