1985: AIDS drama takes us back to a different future 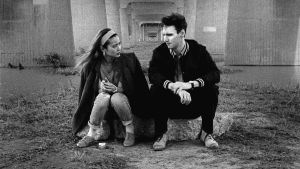 Yen Tan’s wonderful, heartbreaking drama revisits the year of the title, a moment when Back to the Future was in cinemas and US president Ronald Reagan finally acknowledged the existence of AIDS. Shot in sumptuous black-and-white, the award-winning 1985 follows Adrian (Cory Michael Smith), a young New Yorker, who returns to his small Texas hometown to visit with his family for Christmas. His sulking brother Andrew (Aidan Langford), a miffed childhood pal Carly (Jamie Chung), and various awkward dinner table questions make it clear that Adrian has not seen his family in some time.

Adrian, we come to realise, has returned home to tell his family that he has AIDS. They are religious, conservative and do not even know that he is gay. Slowly, however, between strained silences and suspicious questions, we come to wonder if at least one parent doesn’t understand more than they let on.

This is a subject matter that has been explored with exuberance (last year’s BPM), humour (the contemporaneous Parting Glances) and melodrama (Longtime Companion). Yen Tan’s powerful, original film eschews grandstanding and seeks out an aching poignancy in the smallest details and dramatic ironies. Adrian and his younger brother bond over Madonna, but his diagnosis remains a lonely burden that requires taking pills in secret and asking the adoring family dog who will die first. The intimate close-quarter camerawork becomes increasingly claustrophobic as dad’s questions become more insistent and mom retreats into prayer.

The writer-director offers no easy solutions, relying instead on a stellar cast and nuanced responses. Madsen and Chiklis have seldom been better and, with Cory Michael Smith in the central role, the viewer feels every beat of Adrian’s broken heart. As quiet as amazing can be.

Brian Cox: ‘Princess Margaret started to run her fingers down the inside of my shirt’
7

Filming Dolours Price: ‘Her name is Latin for sorrow. That describes her life’
9