‘I don’t think that everybody has to come to a consensus that it’s okay’, he says of his new film, ‘I Love You, Daddy’ 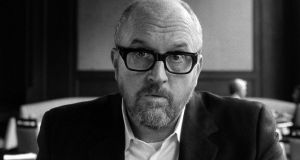 Louis CK in I Love You, Daddy: ‘It’s about a guy who found out too late that he didn’t do his job as a dad’

“It’s not a safe space, it’s not a triggerless place, it just isn’t,” said Louis CK, describing his squirm-inducing new movie, I Love You, Daddy, which debuted to warm applause and some revulsion at the Toronto International Film Festival over the weekend.

Filmed in New York in June, the movie tells of a successful, emotionally lost television writer, played by CK, who is not dealing with the seduction of his 17-year-old daughter by an esteemed filmmaker, and rumored paedophile, who is four times her age.

It’s an observation that raises the question of how well do audiences know Louis CK, a man who has built his career out of relentlessly, thoughtfully mining collective discomforts and taboos.

Unsubstantiated internet rumors of his sexual misconduct with female comics gained steam last month when the comic Tig Notaro told The Daily Beast that he should “handle” the rumors. I Love You, Daddy tackles similar rumormongering; however, like the auteur in the film, Louis CK dodged when asked about them.

“If you actually participate in a rumor, you make it bigger and you make it real.” So it’s not real? “No.” he responded. “They’re rumors, that’s all that is.”

And what did he make of the comments by Notaro, whose work he has championed? “I don’t know why she said the things she’s said, I really don’t. I don’t think talking about that stuff in the press and having conversations over press lanes is a good idea.”

CK, who turned 50 this week, conceded that making a movie that toys with did-he-or-didn’t-he questions could strike some as a little flagrant. “I made a movie that totally walks all over that electric fence, and that’s weird.”

There’s the tricky, icky, central questions, like whether the relationship between the daughter (played by Chloë Grace Moretz) and the near-septuagenarian filmmaker (John Malkovich) is more acceptable given that she is just weeks shy of her 18th birthday. But the film’s provocations include a few slurs and a goof-off comedian (Charlie Day) miming onanism, twice, in front of other people.

“I don’t weigh these things and go, ‘I hope everybody’s OK with this,’” he said. “I think it’s boring to do that, and I don’t think it’s necessary. I don’t think that everybody has to come to a consensus that it’s okay for everybody.”

On Monday, distribution company the Orchard bought the film for $5 million. (The comedian self-financed the movie.) Shot in 35 millimeter in black and white, and accompanied by a sweeping score, the movie is deeply evocative of Manhattan, making it feel like a Woody Allen movie about Woody Allen. (CK said other real-life figures, among them Roman Polanski, fed into the Allen-esque character, too.)

He wrote I Love You, Daddy with Vernon Chatman, and began working on it two years ago. The tale folds in the agonizing that goes into parenting. “It’s about a guy who found out too late that he didn’t do his job as a dad, and he couldn’t use the information that he found, and the girl had no choice but to raise herself,” he said. He added later that after seeing the film on the big screen, he felt that it was also “just kind of a sweet movie about the twilight of childhood and parenthood”.

“There’s always a little bit of blood in the water with what he makes,” said charlie Day, who stars in the film. “And it’s hard to find that in Hollywood, because everyone wants to tread lightly. In a society that’s becoming ultimately far more saccharine, it’s harder to find anybody willing to fly close to the sun.”