Mother! A disgusting, disturbing feast for the senses 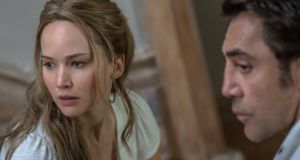 Left to right: Jennifer Lawrence and Javier Bardem in mother! 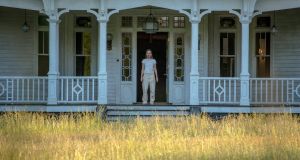 There is a place for pale, retiring films that venture out only on cloudless days. We also need big, loud, even vulgar movies that grab you by the shoulders and hold your head under the cold tap.

Nobody could confuse Darren Aronofsky’s latest provocation with a soberly scored cinematic cadenza (though, oddly, it is a kind of chamber piece). Beginning with taut misunderstandings and ending in a riot of activity, mother! (sic) was designed to receive as many boos as hurrahs. When the former arrived at last week’s Venice Film Festival, Aronofsky cannot have been entirely unhappy. It will not be to everyone’s taste. But it’s certainly a thing.

There is no “solution” to such a film, but, to make some sense of it, remain aware that Jennifer Lawrence’s character – all are unnamed – is the only one not in on the game. Mother! takes place almost entirely from her perspective. Her husband, played by an insecurely cast Javier Bardem, launches the action and acts the passively aggressive patriarch throughout. But this is Lawrence’s dream and reality. One of the dreamlife’s characteristics is a nagging sense that everybody else understands rules not known to the dreamer. Such is the protagonist’s dilemma here.

Lawrence, a harried homemaker, and Bardem, an adored poet, occupy a large house surrounded by endless nowhere. There are no roads. There are no neighbours. The gothic mansion is the film’s only world.

We learn early on – thanks, in part, to clunky CGI – that the house recently burnt down and that the couple are bashing it back together. One evening there is a knock on the door and Ed Harris, a wheezy doctor, invites himself in. A while later his magnificently vulpine wife – played, with full Cruella menace, by Michelle Pfeiffer – joins us to behave even more intrusively.

Lawrence doesn’t get it. Why is Bardem so accepting of their inconsiderate presence? Harris smokes aggressively. Pfeiffer asks the wrong questions about their childlessness. Their two sons (Domhnall and Brian Gleeson) arrive to argue over a will. Hell is a few other people. Later it will be many.

Let’s get a few possible influences and accidental predecessors out of the way. The picture begins in the style of the Edward Albee of Who’s Afraid of Virginia Woolf? The suggestion that the isolated house may stand in for a human psyche points towards Samuel Beckett’s Endgame. Continuing with the theatrical, the film’s second, very different half suggests the transgressive, over-populated violence of Edward Bond. Roman Polanski’s Rosemary’s Baby and Luis Buñuel’s The Exterminating Angel also hang over the action.

So, there’s a lot going on. But the picture finds time to engage with some very human themes. Lawrence struggles against her partner’s selfish battle with writer’s block and his unwillingness to engage with her everyday concerns. Can Aronofsky really have made a film about the pressures of being worshipped by his own adoring fans? Let’s say not. But one wonders what Rachel Weisz, his former partner and the mother! of his child, would make of Lawrence’s terror and frustration. Increasingly awful things happen to her, but the prioritisation of her perspective suggests the film-maker is on her side.

The madness that eventually arrives asks a lot of the audience’s capacity for Grand Guignol. At times the imagery is juiced-up to the point of silliness: the sacred crystal that Bardem worships; the parchment on which he writes his verse. If you thought Aronofsky’s Black Swan was overheated then you are in for a proper shock.

Kept aloft by a ragged, unusually disempowered Lawrence, the picture remains, however, a disgusting, disturbing feast for the senses. The sound designs clangs and hums. The gender politics surge. Explosions douse mere conflagrations.

Here’s something you don’t see every day.