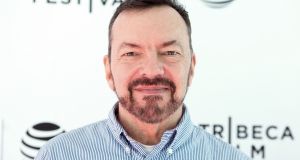 Alan Ball: “After I won the Oscar for a moment everybody agreed with everything I said. I could do no wrong.” Photograph: Mike Pont/WireImage

Uncle Frank, the third feature from True Blood and Six Feet Under creator Alan Ball, concerns the misfits of a South Carolina clan in the early 1970s. Beth (the remarkable Sophia Lillis) is a clever and sensitive teen who sticks out like a sore thumb in a clan defined by bustling domestic women and tough patriarchs who shout at the children and football on television. She finds a kindred spirit in her academic uncle Frank (Paul Bettany). When Beth relocates to New York University where her uncle teaches, he has something to tell her. “Do you know what gay means?” he asks after Beth encounters his long-term partner, Wally (Peter Macdissi).

It’s a pleasing drama not least because it avoids the hicksploitation pitfalls and cliches that characterise many films set in the South. (Watch out – or rather don’t – for the  rightly maligned Netflix adaptation, Hillbilly Elegy.) How did Alan Ball get it right where so many other films and film-makers have floundered?

“Being from the South, I know exactly what you’re talking about,” says the Georgia-born writer and director. “A lot of times [when] Hollywood goes to the South it turns into a clown show. And having come from there I know that’s not true. A lot of getting it right was in the casting and in the writing. Trying to lean into the specifics of the characters. There is something great about the accent and the musicality of the language. At the same time, you have to keep everything grounded, to keep the characters real and not have them turn into cartoons. But I had such an amazing cast that was never really an issue.”

Uncle Frank arrives hot on the heels of the second film adaptation of the landmark Broadway play, The Boys in the Band and Mark Abramson’s pre-Aids memoir, River Days, River Nights. In common with Uncle Frank, these excavations feel like a swerve into lost histories after two decades of representation that were often dominated by HIV.

With Uncle Frank, Ball – who made Out magazine’s list of the 100 most impressive gay men and women in 2008 – has crafted a coming-out narrative that revisits a time when that phrase was often traumatic.

“It’s great that there aren’t terrifying hurdles for so many people,” he says. “I personally like the fact that being gay is becoming less and less and less of a big deal. And I look forward to the day when it’s not a deal at all. We’ve got away to go to get there. I was a sophomore in high school in 1973. I was 16. So I grew up at a time when there was very little representation of gay characters in popular entertainment. I remember those movies and if there was a character and it was intimated that they were gay, they were probably the villain or a psychopath. It is interesting we’ve come such a long way. So it’s interesting to go back and look at an earlier time from this perspective.

As a young man Ball thought about becoming an actor but found himself increasingly drawn towards writing. He graduated from Florida State University in 1980 with a degree in theatre arts. Relocating to New York, he worked as an art director for such magazines as AdWeek and Inside PR. By 1985 he was off-Broadway with a three-act play called Cherokee County.

His 1993 play, Five Women Wearing the Same Dress, secured enough Hollywood interest to land him a job on the hit sitcom, Grace Under Fire.

“I had never been in a comedy-writers’ room,” he says. “During that time – the mid to late 90s – the writers’ room was. . . let’s just say they were not politically correct. Let’s say that there were things that were said in a very vicious way. I personally was shocked by it. It took me a while to get over that and also it took me a while to adjust to how writing was treated. You know in the theatre there is a certain reverence for the text and that really does not exist in a writers’ room.

“We would do a run through of the script and that would go well and we[’d] do our revisions. And we’d go through the next run through and a lot of jokes that worked the day before didn’t get a laugh because people knew they were coming. And it surprised me when people turned around and said that joke doesn’t work any more. That’s because they had heard it before. But on that basis the whole script would get thrown out.”

Ball has been candid about the behaviour of the headliners of both Grace Under Pressure and Cybill, the two sitcoms he wrote for, featuring Brett Butler and Cybill Shepherd respectively. Both actors were apt to confuse themselves with their on-screen characters.

“The shows I worked on were pretty toxic because the stars of the shows were toxic,” says Ball. “For the first few years I remember thinking: man, if I ever get my own show we are not going to do it this way. And eventually I did and we didn’t.”

Happily, he challenged his workplace frustrations into the screenplay for American Beauty, a film about a frustrated middle-age man (Kevin Spacey) lusting after his daughter’s teenage friend. That dynamic was perfectly pitched in the aftermath of Bill Clinton’s affair with Monica Lewinsky but the film’s reputation has been subsequently tainted by its star.

“It’s hard to watch American Beauty right now without thinking about Kevin Spacey and all the allegations against him,” says Ball.  “Especially since he plays a character who is lusting after someone who is not age-appropriate. It’s unfortunate.”

“It was interesting because I used to go to meetings and pitch my ideas and people would usually look at me and say: well, I don’t know if we agree with that,” says Ball. “After I won the Oscar for a moment everybody agreed with everything I said. I could do no wrong. And then I wrote a movie called Towelhead and that bombed. And I did a series for HBO that didn’t go very well. And I’m no longer the golden boy.”

He has, despite these missteps, presided over an extraordinary career. As the creator, writer and executive producer of the HBO series Six Feet Under, Ball was at the vanguard of the premium TV revolution that began with The Sopranos.

“When I first saw The Sopranos I felt really inspired,” says Ball. “I thought: wow, there’s so much more to television than I thought. With Six Feet Under it felt like we were doing something special. And I was pleased that [we] got the recognition that we did and that people seemed to like it. But I once got a piece of advice from Ed Begley Jr. He said: ‘I try to do the best work that I can and I stay out of the result.’ That’s something I try to do as well. I never got into this thinking I want to be successful. I got into this because I love doing it. The minute you start thinking about how things will be received or if they are likeable or relatable or how much money it will make, it becomes about marketing not writing. You’re no longer being an artist or storyteller.”

Ball, who is a Buddhist, talks philosophically about rolling with the punches. It’s something he knows a bit about. He has experienced extraordinary success as the executive producer of Banshee and as the creator of True Blood. But he has also experienced the cancellation of Here and Now, a 2018 drama starring Tim Robbins and Holly Hunter.

“I was really proud of Here and Now and I loved working on it,” he laughs. “And it was universally reviled. Once you get past the emotional response to that, you just pick up and go on to the next thing. It didn’t turn out the way I wanted. On the other hand, I had no idea that True Blood would become this huge phenomenon. It was certainly fun while it lasted. But ultimately, everything is temporary.”

Uncle Frank is available on Amazon Prime from November 25th.