The official trailer for Crock of Gold: A Few Rounds with Shane MacGowan, which looks at the life and career of The Pogues frontman. Video: Altitude Films 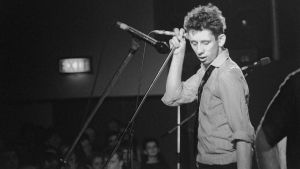 The Pogues frontman reputedly refused to give an interview for Crock of Gold: A Few Rounds with Shane MacGowan.

Film-maker Julien Temple knows the slings and arrows of the movieverse all too well. Having started his career with the era-defining 1980 Sex Pistols documentary The Great Rock ‘n’ Roll Swindle, he endured the unfairly maligned Absolute Beginners before establishing a considerable reputation as a documentarian.

Crock of Gold: A Few Rounds with Shane MacGowan feels like an endurance event for the director, a film for which The Pogues frontman reputedly refused to give an interview.

It falls to archive footage, dramatisation, gaudy animations and interviews-by-proxy to form the narrative. In contemporary footage we meet famous chums and enablers including Johnny Depp, who also acted as a producer.

Depp, Gerry Adams and others sit down with MacGowan for the rounds of the title. The man himself looks in a sorry state, wheezing and hissing and unable to walk unaided. (Irish viewers who complained that his 2019 appearance on The Late Late Show, replete with a fake pub set, was exploitative are unlikely to be impressed.)

In an opening section MacGowan talks through his Tipperary childhood – getting drunk before catechism, pissing out the door, tales of the Black and Tans – without mentioning that he grew up in England. When Bobby Gillespie asks MacGowan when he first moved to London, he is promptly told to drop it.

MacGowan’s punk years are a fog of drugs and alcohol and seedy squats. A young spiky-haired MacGowan rails against punk fanzine Sniffin’ Glue for being as establishment as the Financial Times. As immortalised in The Old Main Drag, he works Soho as a teenage hustler: “Just hand jobs,” he tells Depp.

He’s an unlikely celebrity but a run of great records, including 1985’s Elvis Costello-produced Rum, Sodomy and the Lash and 1988’s If I Should Fall from Grace with God, and a series of terrific songs that fused punk and traditional Irish riffs, made him a favourite on English chat shows.

The later years of break-ups and decline – MacGowan hasn’t released an album since 1997 – are even blurrier than those that preceded.

While those around MacGowan are keen to worship him as an uncompromising Hunter S Thompson figure, Temple allows for the sadness of MacGowan’s situation. Too often, he’s hard to watch.

Just as MacGowan leaves one to ponder a talent squandered, Crock of Gold makes one wonder about the documentary that might have been if only the subject had been more co-operative.

“I did what I did for Ireland,” says MacGowan. By the end credits we are still not sure what that means.