The official trailer for Amazing Grace, a previously unreleased film from Aretha Franklin's recording of the album of the same name in a Los Angeles church in 1972. Video: Neon 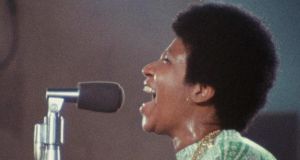 AMAZING GRACE ★★★★★
Directed by Alan Elliott, Sydney Pollack. Featuring Aretha Franklin, James Cleveland, CL Franklin
Brilliant documentary on the recording of the late Aretha Franklin’s 1972 gospel classic Amazing Grace. The release was delayed initially by a technical error and then as a result of legal action from Ms Franklin. Its eventual arrival provides the authors of online listicles a permanent starting point when considering the 10 greatest concert films of all time. The music is transcendent. The editing is perfectly paced. The congregation offer a vital snapshot of a time and place. A masterpiece of its type. G cert, lim release, 87 min Full review/trailer DC

This award-winning drama concerns a young Traveller girl who, a huge fan of Mohammad Ali, trains herself into state of pugilistic excellence in the early 1970s. Float Like a Butterfly is essentially a road movie using boxing as a tonal ingredient, a mode of feminist expression and a potential escape route. Already an experienced actor at just 17, Doupe immerses herself fully in a role that requires intelligence to be balanced with raw determination. Authentic, funny, moving. 15A cert, gen release, 101 min Full review DC

“The emotions you are having are not your own. They are someone else’s. You are not the cat – you are inside the cat.” The third mesmerising, teeth-setting feature from writer-director Decker concerns the shifting dynamics between the troubled young woman of the title (Howard), her anxious mother (July) and Madeline’s experimental theatre group, a troupe overseen by the overbearing, plummy Evangeline (Parker). Formally fearless and endlessly intriguing, Madeline’s Madeline puts experimentation in the service of racketing tension. Howard puts in one of those rare, explosive turns that leaves you reconsidering the very nature of acting. 15 cert, QFT, Belfast; Triskel, Cork, 93 min TB

Lapsed 21-year-old Pokémon trainer Tim (Smith) gets a call from faraway Ryme City, where humans and free-range Pokémon co-exist. The news is not good: Tim’s long-estranged police detective father and his Pikachu partner have been killed in an accident. There Tim is accosted by an eager junior reporter (Newton), who suggests there’s more to the accident than meets the eye. He also meets a Pikachu voiced by Reynolds. Imagine a fun, PG version of Deadpool that you didn’t want to kick in the head every second. The verbose pre-Raichu turns out to be a terrific innovation in a film that links back to the Mewtwo plot (not a spoiler; it’s in the trailer) of the original 1998 feature. If only the human characters were so engaging. PG cert, gen release, 104 min Full review TB

This Icelandic film opens with an act of sabotage, as the impressively jumpered 50-year-old heroine Halla (Geirharðsdóttir) uses a bow and arrow to take down a rural powerline. In her village no one suspects that the mild-mannered, t’ai chi practising choir mistress is spearheading a one-woman campaign against Iceland’s expanding aluminium industry. When Halla learns that she is in line to adopt a Ukrainian orphan (Hilska), she has to choose between her dream of having a child and her determination to save the world. As a comedy about the environment and an action film centred on a middle-aged woman, this curiosity is full of surprises. 12 cert, QFT, Belfast; IFI, Dublin, 101 min Full review TB

Enormously engaging study of a young girl (Fisher, brilliant) preparing for the jump into the US high school system. There isn’t an enormous amount of plot. Kayla finds herself at a birthday party for one of the cool girls and ends up slinking away in appalled shame. She makes friends with a nice older girl (yes, they do exist in this world) when visiting her new high school. And so on. There is much awkwardness here, but also a great deal of hope and warmth. Essential. 15A cert, gen release, 93 min Full review DC