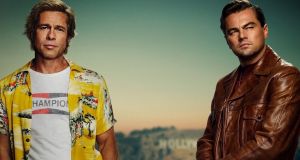 Quentin Tarantino’s Once Upon a Time in Hollywood, a pop-cultural tour of late 1960s LA starring Brad Pitt and Leonardo DiCaprio, is to have its premiere at the upcoming Cannes film festival.

The director’s ninth feature was long marked down as a likely inclusion, but, when the official selection was unveiled two weeks ago, it was not on the list. Thierry Frémaux, festival director, then confirmed that the film was not yet ready, but teased the attending press by suggesting he was still hoping for good news.

So, it has transpired.

“We were afraid the film would not be ready, as it wouldn’t be released until late July,” Fremaux said on Thursday morning. “But Quentin Tarantino, who has not left the editing room in four months, is a real, loyal and punctual child of Cannes! Like for Inglourious Basterds, he’ll definitely be there – 25 years after the Palme d’or for Pulp Fiction – with a finished film screened in 35mm and his cast in tow.”

The film will compete for the Palme d’Or.

Tarantino’s Pulp Fiction premiered at the event on May 21st, 1994 and there is much speculation that the new film will arrive on the same day this year.

Di Caprio appears as a TV star – loosely based on Burt Reynolds – who is struggling to make a career in movies. Pitt plays his stunt double. Others actors swelling a starry cast include Al Pacino, Bruce Dern, Damian Lewis and Dakota Fanning (whose sister Elle is, slightly awkwardly, on this year’s Cannes jury).

Controversy greeted the news that the film would touch upon the murder of actor Sharon Tate – played by Margot Robbie – by the Manson Family in August 1969. Tate was the wife of Roman Polanski, later convicted of rape, and the case has endless uncomfortable ramifications in the era of #MeToo.

Fremaux also announced the late inclusion of new films by Cannes stalwarts Abdellatif Kechiche and Gaspar Noé. Kechiche, who won the Palme d’Or for Blue is the Warmest Colour in 2013, returns to competition with Mektoub, My Love: Intermezzo.

Noé, the middle-aged “terrible” behind Climax and Irreversible, presents the 50-minute Lux Æterna as a midnight screening.

The Cannes Festival runs from May 14th until May 25th.