Review: Icy thriller is as raw as the fish the protagonist is forced to subsist on 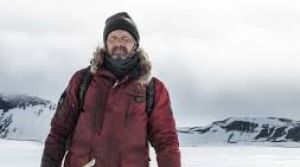 Joe Penna’s snowbound thriller stars Mads Mikkelsen as the sole survivor of a light aircraft crash somewhere in the circle of the title. It’s impossible to know precisely how long Overgård – that’s what it says on his uniform – has been stranded on this polar landscape, but, as the film opens, he has been there long enough to have established a daily trudge: check the cast lines for fish, scan the radio for frequencies, maintain the SOS letters he has carved into the tundra, and watch out for bear pawprints.

Finally, a rescue helicopter appears in the distance, but it is felled by the same icy blasts that presumably brought Overgård here. It crashes, leaving a semi-conscious survivor alive (played by the Icelandic actress Maria Thelma Smáradôttir) and leaving Overgård with challenging decisions to make.

In common with that film, Arctic is entirely reliant on Mads Mikkelsen’s precise, unshowy, and scruffily-bearded performance. The star of The Hunt and Hannibal was assisted by tough working conditions (he has called the frozen 19-day shoot “the toughest of his career”) but the nuance is all his.

The wintry isolation and potential for altruism make for further intriguing overlaps with such elegant, metaphor-ready works as Robert Bresson’s A Man Escaped. Cinematographer Tómas Örn Tómasson finds arresting tableaux in the vast, bleak whiteness. As raw as the fish the protagonist is forced to subsist on.