Musician, actor and filmmaker believes it is a good time to be in the acting game 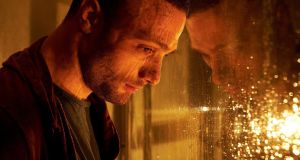 Cosmo Jarvis: ‘Acting has been a real passion forever.’

“I’m the worst version of myself in interviews,” says Cosmo Jarvis apologetically.

“I tend to speak too much anyway. I ramble on. So I get quite heavy in interviews. I’m always overthinking and trying to come up with the perfect answer because I assume the interviewer has tried to ask the perfect question. It’s not really a reflection of my own character.”

He pauses. “I don’t even know what my own character is.”   It’s not as bad as all that. At 31, the English musician, actor and filmmaker makes for lively company and an engaging unofficial spokesperson for Supermacs.

“Supermacs is far superior to McDonald’s in every single way,” he says of the Irish fast food chain.”The breakfast menu is great. The quality of the meal and the quality of the individual ingredients is amazing. You order a grilled chicken burger and you don’t get the soppy thing you get in other places; you get crispy lettuce and grill marks on the chicken. The fries taste like potatoes. I really hope they expand into the UK.”

In 2017, Jarvis was nominated in the Most Promising Newcomer category at the British Independent Film Awards for his brilliant turn opposite Florence Pugh in William Oldroyd’s Lady Macbeth. He has subsequently appeared in Alex Garland’s Annihilation, Adewale Akinnuoye-Agbaje’s Farming, and Peaky Blinders. This year, despite Covid interruptions, he will feature in Raised By Wolves, HBO’s new Ridley Scott-produced science fiction series and an adaptation of Carter Sickels’s The Evening Hour. In February, he starred in Funny Face, a dreamy new riff on comic book heroes from Dark Night director Tim Sutton.

Jarvis has, additionally, chalked up various Irish scene partners. Earlier this year he headed up a cast that included Barry Keoghan and Niamh Algar in Calm With Horses, mastering an Irish accent for the role. He relished the work.

“The one thing that people can’t escape is their accent,” says Jarvis. “We, as a society, read so much into a person based on how they talk. So it’s an important part of what an acting job entails. And it’s a great challenge as well. Listening to an accent and working out if you can properly execute the way someone else talks - the intonation, the musicality, stuff like that - I find that really joyous. And also because I hate the sound of my own voice.”

Jarvis is currently starring opposite Dubliner Lauren Coe in Nathalie Biancheri’s award-winning debut feature, Nocturnal, an intriguing drama in which an older janitor takes a keen interest in a schoolgirl.

“Nathalie has Irish connections which I’m not too well versed in,” says Jarvis. “But I think Ireland tends to produce good actors. I don’t know how it came about but there’s tons of great Irish actors at the moment. And I’m starting to realise there are tons in movie history but I didn’t always know they were Irish because the Irish are so good at acting.”

Nocturnal, in common with Calm With Horses, requires a huge, brooding, mumbling performance from the up-and-coming actor. He stayed in character for much of the production.

“I tried to carry around as much as I could for the duration of the shoot,” he says. “Nathalie and the others didn’t mind. And from a logistical point of view it helps with consistency.”

Harrison Cosmo Krikoryan Jarvis was born in New Jersey, to an Armenian-American mother and an English father. The family moved to Plymouth when he was a baby, before settling in Dorset.

He came to prominence around a decade ago as a musician, releasing his first two LPs - 19 Songs By Cosmo Jarvis and Humasyouhitch/Sonofabitch - when he was in his teens. He hasn’t recorded or written music since the 2013 EP They Don’t Build Hearts Like They Used To.

“I kind of stopped listening to music all together,” he says. “It left a nasty taste in my mouth. I don’t know why. I really should get back into listening. But when you’re hunched over a logic mixer for days on end and you’re thinking about compression levels on a piece of bass or guitar, it’s a lot. It’s so nice to just have to worry about portraying an actual human being. And you don’t need any tools to do it.”

He has wanted to be an actor for as long as he can remember. He recalls auditioning unsuccessfully, aged five, for a production of Oliver!

“My old music manager used to share an office with a casting director,” he says. “And for years I’d say: oi, can you sort me out with something? Acting has been a real passion forever. But where I was from I knew I needed to do something else as a stepping stone. There was no route into movies from Devon. So many other people I grew up with were really talented performers but the dream was so unattainable.

“Even thinking about which door to knock on to try and get anywhere seemed silly. Part of the reason we made our own films was to get some credibility. And then you get a bit of a complex around the kids that go to the schools that supply the industry. You think:  I’m not worthy, I’m a bumpkin. But you give your whole being and you say: f**k it, I’m going to do this at all costs, even if it means I’m drinking Bisto for dinner.”

Nocturnal is on release from September 18th