The Painted Bird: This film sent patrons running from cinema. I recommend you watch it

Review: Wartime horrors and inhumane acts are present from the very beginning 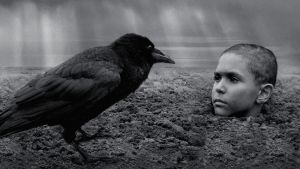 The events depicted are as appalling as the reports from Venice and Toronto suggested.

It is exactly a year since the Venice Film Festival provided confirmation that it is still possible for a motion picture – a monochrome art film at that – to generate appalled headlines in the red tops. The Daily Mail was among those reporting on punters, hands slapped over dampened mouths, running for the exit during the premiere of Václav Marhoul’s gruelling drama.

Detailing a Jewish boy’s passage across an unnamed European country during the second World War, the adaptation of Jerzy Kosinski’s novel sees gouged-out eyes fed to the family cat, the hero buried up this neck and attacked by crows, endless episodes of sexual molestation and too many hangings to count. (Sorry if those are spoilers, but it is reasonable to let the brave reader know what he or she is in for.)

The events depicted are as appalling as the reports from Venice and Toronto suggested, but those coming fresh to the material after a year’s marination in outraged headlines may find The Painted Bird less explicit in its depictions than expected. The ocular ingestion does play like something from The Evil Dead, but, for the most part, the horrors are shown in bloodless middle distance.

What really gnaws at the psyche is the relentless nihilism. Marhoul, a Czech director adapting a novel by a Polish author, has made the interesting decision to use the Interslavic language – a semi-constructed tongue – so that no one nation need feel blamed for the mounting atrocities (just about the most decent character is a superannuated German soldier).

Alas, this doesn’t quite let the human race as a whole off any hooks. Here is a world in which merely electing to let a child live counts as kindness.

Kosinski’s book triggered immediate controversy on its publication in 1965. It was first suggested that the “autobiographical” elements were exaggerated and then that large sections were plagiarised. Perversely, those infelicities now bolster its reputation as an uncategorisable semi-novel.

Marhoul need make no excuses in his lengthy, episodic screenplay. The film is a work of fiction that argues for horrible universal truths. Initially unnamed, young Joska (Petr Kotlár), who never speaks, is sent to live in presumed safety with his aunt when the Nazi persecutions begin. Her house burns down and he begins a journey through hostile terrain towards his remote home.

One is tempted to speak of “escalating horrors,” but, in truth, Joska’s encounters are indescribably awful from the very beginning. Udo Kier is an insanely jealous husband with a sharpened spoon. Julian Sands (of all people!) is a comfortably off paedophile. Barry Pepper (again!), as a Russian sniper, seems almost reasonable when, picking off civilians in a revenge attack, he mutters: “An eye for an eye.”

To quote a very different film, “Dude, at least it’s an ethos.”

Sometimes the incidents stray into the Gothic or the absurd. Joska’s capture by a nymphomaniac in the woods speaks more of the novel’s publication in the mid-1960s rather than its origins in the 1940s or its current adaptation in the 21st century. Such things were de rigueur in those days. We are always happy to see Stellan Skarsgård, but, even in the dying days of the war, one didn’t encounter too many 68-year-old German infantrymen.

For the most part, however, The Painted Bird – shot crisply by Vladimír Smutný – deals in visual poetry that compels attention even as it wallows in unkindness. To come to any sort of redemptive resolution would be a betrayal of the film’s unforgiving aesthetic, but Marhoul does manage to complete the odyssey with a satisfactory catharsis.

Should definitely be seen once (though you may want to leave it at that).