A White White Day: A creepy and grim slice of Scandi-noir 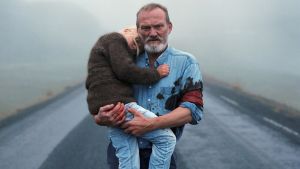 A White, White Day is not a barrel of laughs

One could, without fear of contradiction, categorise Hlynur Palmason’s creepy as a typically slow, characteristically grim exercise in Scandinavian introspection.

A White, White Day does not rush its way through its catalogue of tight-lipped crises. Maria von Hausswolff’s camera is as interested in the Icelandic weather – sometimes sunny, often soaked in bereavement drama damp vapours – as it is in the furrowed faces of a squabbling family. The lengthy takes sometimes leave us uncertain as to where our eyes should focus.

Yet, for all its evasions, Palmason’s film is packed full of striking set-pieces. The opening sequence certainly satisfies that description. We follow a car driving (erratically?) along a grey highway enclosed in suffocating mist. After a minute or so, the vehicle misses a turn and hurtles through the side rail. We then move forward two years to find Ingimundur (Ingvar Sigurðsson), the driver’s widower, coping indifferently with life on his own. He gets on well with his granddaughter, but has difficulty finding a smile for anyone else.

A White, White Day is not a barrel of laughs, but one gently satirical scene does cleverly undercut what is to follow. Ingimundur, a police officer, picks up a crime novel and snorts at the typically breathless praise on the back. “A masterly woven plot,” he reads. “I could neither eat nor sleep from the moment I opened the book,” another blurb-whore effuses.

A White, White Day plays like the photographic negative of a typical Scandi-noir yarn. Clues fall from the pages of the paperback and Ingimundur, already paranoid, begins digging into his wife’s hidden life.

There are no startling revelations. But the accumulating melange of social unease and psychological torment is transfixing. Sigurðsson, a familiar face from films such as Jar City, introduces enough sparks into the stoicism to confirm that breakdown is imminent. Ída Mekkín Hlynsdóttir, playing his granddaughter, is excellent as the vibrant yang to his sombre yin (don’t write if I have that the wrong way round).

What really sticks in the brain, however, are the quietly startling visual coups. We follow a boulder’s arc from a dangerous spot in the road to submersion in the North Atlantic. A tramp down a tunnel takes us into darkness. All this seems to be leading towards one inevitable destination. But you must take nothing for granted here.

Opens in cinemas on August 28th

Words matter: why I made a new Irish Tree Alphabet
5

The Boys in the Band is theatrical, dated and utterly fabulous
6

Words matter: why I made a new Irish Tree Alphabet
5