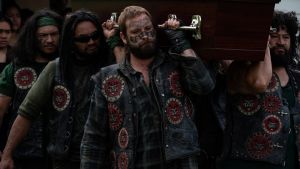 Savage opens with an act that lives up to the title. Damage (Home and Away alumnus Jake Ryan), the film’s protagonist, is barely discernible behind his many facial tattoos and in the sleek dark of James L Brown’s photography.

He wields a hammer as he calls on Dice. They may know each other but, as Damage puts it: “I’m not treating you any different, Dice.”

Dice protests. “See this is why everyone hates you,” he says. The hammer comes down on his hand just the same.

Writer-director Sam Kelly’s debut feature cuts to 1989 for the middle chapter of Damage’s origins story. An honorary gang Maori who has risen through the ranks, Damage is caught up in a power struggle between Moses (Solo: A Star Wars Story’s John Tui) and Tug (Alex Raivaru) when he meets Flo (What We Do in the Shadows’ Chelsie Preston Crayfird), a confident woman from a privileged background. He quips that his facial tattoos are there so that she can see who he really is. The rest of the encounter is even more awkward.

An earlier flashback to the 1960s reveals an abusive, violent father and a juvenile sentence characterised by sexual and physical abuse. Danny – as Damage was once known – finds consolation in his Maori roommate, Moses (Haanz Fa’avae-Jackson). Together they start a gang called the Savages, with Moses as president and Damage as the muscle.

New Zealand is so commonly depicted as islands of rolling, vendant groves presided over by a chilled Covid-defeating government that it’s easy to overlook that country’s racist, colonial history and the underclass depicted in Lee Tamahori’s Once Were Warriors and now Sam Kelly’s Savage.

The triptych structure is a little fiddly, but Savage is never less than powerful. Writer-director Kelly consulted with former gang members and street cast to give the film a convincingly grim aura of authenticity. It shows, as does the script’s keen grasp of toxic masculinity.