Dear Matt Damon: Welcome back. This is not the cuddly, unified country you left in May

Warning: The Irish are suddenly not so fond of Americans coming from a Covid hotspot 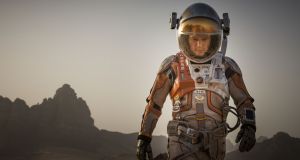 Matt Damon takes all precautions on return to Ireland. Oh no, hang on it’s a still from The Martian

I heard you were coming back to Ireland to finish your film. Welcome back to what we will now be calling “your spiritual home” henceforth. Each time any of us will refer to Dalkey forever more, we’ll be using the descriptor “the sleepy seaside village that Matt Damon fell in love with”. I’d fall in love with Dalkey and Killiney, too, if I was living in a €15,000-a-month pile on Vico Road and not, as would more likely be my destiny, paying €1,200 a month for a single room “with en-suite” (read: sink in the actual bedroom).

Anyway, you may be holed up (only A-list stars are ever “holed up”) in the lap of luxury, but I feel I must warn you that this is not the cuddly, unified country that you left in May.

First things first; Leo Varadkar, that “badass” that was running the country? He is now second-in-command. Officially, at any rate. We now call him the Tánaiste (pronounced tawn-ish-tuh). The Taoiseach is now Micheál Martin  (pronounced me-hole, with alarming regularity). He’s not nearly as enamoured of celebrities as Leo might be but look, he is an Irish person. And because he is an Irish person, you can expect one of two reactions: slobbering, rabid lickarsery on account of you being a movie star, or a very studied, feigned indifference, to keep you in your place and from getting Notions.

We are now more likely to be a fairly paranoid bunch

Don’t be alarmed in the event of the former. Call it a national inferiority complex if you like, but we tend to lose our collective minds when an outsider, specifically an American, and specifically a famous American, openly says that they kinda, sorta like it here. Just ask Julia Roberts who, for five minutes back in the 1990s, was pretty much conferred citizenship.

I do wonder: did you go home and tell your fellow Los Angelenos that we Irish are a fun sort, partial to the craic and an easygoing sort? Well, all that is pretty much with O’Leary in the grave (Google it). No, we are now more likely to be a fairly paranoid bunch, taking against those who aren’t adhering to guidelines. We take videos of crowds who aren’t social distancing and bitch about them on Facebook until someone loses a job.

Some of us are against the very idea of wearing masks at all. If you are going to Super Valu again, I do suggest wearing a mask. They might not let you in, even if you are Matt Damon Who Loves Dalkey.

The next thing to note is that while you, a Hollywood star, will enjoy immunity from prosecution, the Irish are not especially fond of hearing about Americans coming from a Covid hotspot and running hither and thither about the place. If you’re going anywhere now, just be sure to tell folks that yes, you did indeed self-isolate for 14 days.

Whatever you do, don’t go to any golfing dinners. No exceptions

My guess is that you recently flew into Dublin and couldn’t wait to return to the soothing bosom of your fellow Killiney and Dalkey denizens. From what I hear, the locals in SoCoDu have really taken a shine to you, even putting New York Times journalists off the scent who came looking for an inside scoop.

Dublin in the summer and Dublin in the autumn are two very different beasts entirely. The Forty Foot will certainly be less busy, but the water will be colder than a witch’s womb. There are some other Irish spots that your fellow famouses have heartily endorsed if you want a change of scene. Beyoncé is partial to a cycle in the Phoenix Park, Johnny Depp has visited Fungi the dolphin in Dingle, and Bruce Springsteen found much to like at the Leisureplex in Stillorgan back in 2016. Or you could throw everyone off the scent by heading to the cinema in Tullamore, like Kim Kardashian and Kanye West did, on their honeymoon.

Whatever you do, don’t go to any golfing dinners. No exceptions. No, not even if Bono suggests it. You’ll thank me in the end.