Antonio Campos: ‘When I got into the New York Film Academy I lied about my age’

Devil All the Time director talks Southern Gothic, Netflix and the high cost of Elvis tunes 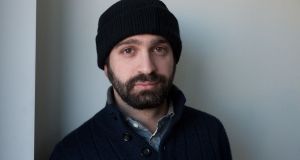 Antonio Campos: “Netflix are very supportive of filmmakers. They always came back with thoughtful notes.”

In 2008, Antonio Campos, an agreeable New Yorker of Latin descent, arrived at the Cannes film festival with his debut feature Afterschool. He was just 24 years old. How had he come so far so fast? Where would he go next?

In fact Antonio was already something of a veteran.

“I knew that I wanted to be a filmmaker around 10 or 11,” he says. “And I made my first short at the New York Film Academy when I was 13. It was called Puberty and it was about a boy going through puberty.”

Write what you know?

“Well, yeah,” he says with a knowing laugh. “When I got into the New York Film Academy I lied about my age. The guy said: ‘We don’t really have anyone here who is 13. Lie about your age. Tell them you’re 16.’ I had a little moustache because my father’s Brazilian and my mother’s Italian. Latin blood, I guess?”

I call it midwestern gothic. It’s haunted by something a little different

He scratches his beard and casts his eyes to heaven at the outrageousness of it all.

“When I turned in my script for Puberty, they said: ‘This is what you experienced three years ago. Why don’t you write about what you know now?’ Ha, ha!”

It all worked out. Campos, son of the acclaimed Brazilian journalist Lucas Mendes, went on to New York University, but, already busy in the real world, left without graduating. Simon Killer, a sinister drama starring Brady Corbet, got raves in 2012. Christine, his study of journalist Christine Chubbuck’s on-air suicide, was on many critics best-of-2016 lists.

Campos now takes a surge towards the mainstream. Based on a novel by Donald Ray Pollock, The Devil all the Time is an epic gesture in near-Southern Gothic.

“What I loved about the book was that it felt like a mixture of Southern Gothic and hardboiled fiction: Flannery O’Connor meets Jim Thompson, ” he says. “There is a haunted quality to the grotesquery of Southern Gothic that makes it fun to read.”

Here’s the thing. It’s impossible to watch The Devil all the Time without thinking of Flannery O’Connor, William Faulkner and Carson McCullers. Yet the film isn’t really set in the south.

Devil All The Time trailer

Pollock writes about his own home town of Knockemstiff, Ohio (what a name). We are only a short distance from Kentucky and West Virginia, but this is still technically the middle west.

“Yes, it’s actually the midwest and that adds to the strangeness,” Campos says. “That’s why I call it midwestern gothic. It’s haunted by something a little different. Flannery O’Connor said that the south was not Christ-centred, but Christ-haunted. It almost as if it’s a lean into the aspects of religion that are haunting. The crucifixion. There’s a lot [of] blood in the Bible.”

The film arrives at the most challenging period for theatrical exhibition in the medium’s history. In any normal year, Netflix would be directing The Devil all the Time towards a film festival before launching on the service. Covid has limited those options, but the crisis has brought greater focus on the whole Netflix empire. Charlie Kaufman, whose I’m Thinking of Ending Things arrived there last week, has talked of the endless freedom the company gave him.

“It was similar for me,” Campos says. “Not freedom in the sense of ‘spend all the money’. We had a budget. We knew the size of film we were going to make. But they are very supportive of filmmakers. They always came back with thoughtful notes and thoughts.”

Does he have any concerns about the streaming services not engaging enough with cinemas?

“They have a precedent where they don’t guarantee a theatrical run,” Campos says. “They say: ‘We will have that conversation down the line.’ I had seen and heard enough to know they would engage with that. I am always focused on the next thing in front of me. Maybe I should focus more on what’s further down the line.”

In fact, the film will make its way into a limited number of US cinemas, but it remains a couch-bound entertainment for most punters. None will complain about the starriness of that cast. The list gives one hope.

These young actors have largely balanced commercial work with films by enterprising indie directors such as Campos (note that both Spider-Man and Batman are in there). Wasikowska rarely makes a silly choice. Keough and Pattinson go out of their way to find angular entertainments. Here Riley plays a wandering murderess and Rob a psychopathic preacher.

“Oh, I think that’s right,” Campos says. “Those actors are fearless. And Riley is effortlessly fearless. She doesn’t bat an eye when doing what she does. And they are both endlessly collaborative. Rob shows up on set and presents you with the role. But he will have conversations. I told him: ‘Don’t worry about going too far with anything.’”

If I may venture a facetious observation, I note that, taking us from the 1940s to the 1960s, the film slips a delightful selection of contemporaneous pop records onto an otherwise sombre soundtrack. Yet there is nothing by Riley Keough’s grandfather (one E Presley, late of Memphis). Surely that must have come up in conversation. The great man was never off the radio.

“No. We never talked about Elvis,” he says,

Fair enough. She must be sick to death of chatting about him.

“I don’t know. I think Riley would engage with an Elvis conversation if I started one. The truth is I love Elvis Presley’s music, but we couldn’t afford it.”

Even on the Netflix dollar?

“We weren’t on a huge budget. It still counts as an indie movie. When you are talking about the Elvis catalogue, you are still talking about serious money.”

Like everyone else, Antonio Campos has been inconvenienced by coronavirus. New York City, his home, was a nightmare in the early stages, but is now doing better than many other parts of the US.

Whenever it was safe to do so, Campos and his wife Sofía Subercaseaux – the editor of Christine and The Devil All the Time – packed up and made their way to her native Chile. There they sit as they try to navigate uncertain waters.

He and Subercaseaux have been living and breathing the current film for the last year. Are they able to escape it in the privacy of their own home?

“That’s not easy,” he says. “We have done it twice now. This time we had a six-month-old when we were shooting. That made it more challenging. There is this other real thing we had to pay attention to. At the end of the day it works because my wife is very adamant about stopping the conversation. I will push to have the conversation. I will wake at four in the morning and nudge her. But she is adamant that we separate these things.”

There is one exciting project that has been a slow burner. Throughout quarantine, Campos has been developing a TV drama based on The Staircase, a ground-breaking documentary series on the trial of novelist Michael Peterson, who in 2003 was convicted of murdering his wife. It sounds as if that will be a high-profile operation.

“I have been writing that with other writers and that has Harrison Ford attached to play Michael Peterson,” he says. “That’s my focus now and I always focus on the thing that’s in front of me.”

He also has the 25th anniversary of his time in the business coming up. He is 37 years old.

The Devil all the Time streams on Netflix from September 16th